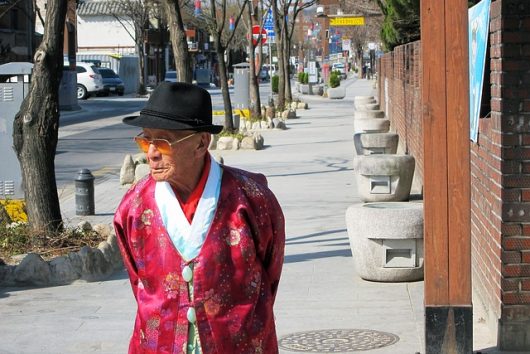 Financial instability is an ongoing issue for older generations in South Korea. Almost half of South Korea’s elderly are living in poverty.

The life span of South Koreans has increased, and so has economic difficulty for younger people in South Korea. This makes it much more difficult for the children of the elderly to provide for their parents in the way that South Koreans did before the 1990s.

Not only that, but the percentage of kids who believe they should take care of their ailing parents has fallen from 90 percent to 37 percent.

Benefits for the retired are not good, so even those who were financially successful during their younger days are living in severe poverty during old age.

Pensions in South Korea only add to about a quarter of the minimum household income, giving the elderly only around $200 per month. Not only that, but only around 35 percent of seniors receive any pension at all.

South Korea’s pension system did not begin until 1988, which leaves many elderly citizens without pension benefits. Even though the pension does not amount to a much, going without it makes living expenses even more costly for certain individuals.

Many elderly people in South Korea are trash collectors, attempting to scavenge up enough tossed goods to cash in for money so that they are able to buy medicine and food.

Most elderly citizens that have been interviewed feel they must perform odd jobs and find money on their own rather than asking for help. This may be because they were unable to properly provide for their children or they believe that no one owes them anything.

“You see on the news quite frequently elders who get killed by vehicles while picking up cardboard,” says Mr. Shin So Ho, manager of the grassroots organization Silver Volunteer Cooperation Associations.

On Thursdays, churches give out the equivalent of 50 cents to seniors, and it is reported that anywhere from 300 to 500 seniors show up to receive this free gift.

South Korea’s elderly are living in poverty because of these factors, but the most important factor that needs changing is government benefits in South Korea for the elderly.