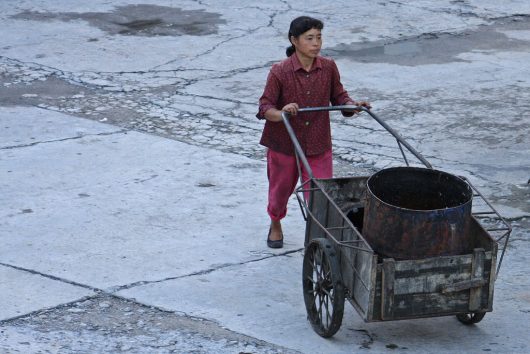 In 2012, speakers and screens worldwide played “Gangnam Style,” a song that illustrated the life of the city that contains seven percent of South Korea’s GDP in an area of 15 square miles. The hit surpassed two billion views on YouTube, but the opulence within the video is in no way representative of the true poverty in South Korea.

However, beneath the luxury, technology, and consumerism that characterize the nation is a forgotten and struggling generation largely responsible for transforming South Korea into a modern economy — the elderly.

Every Thursday, seniors line up for hours outside churches to receive the equivalent to 50 cents and a juice box or a banana. Organizers of this short-term relief program for poverty in South Korea report 300 to 500 seniors at each church every week.

“Half of the elderly is poor in [South] Korea. So it’s really a very serious problem,” Seoul National University professor Ku In-hoe told NPR. The country has the highest elderly poverty rate of the 34 developed nations.

The elderly living in poverty in South Korea earn 50% or less of the median household income, which amounts to U.S. $9,890 per year, according to the IB Times.

The government does provide alleviation with pensions of $200 per month for the retired, but the National Pension Research Institute Survey revealed this amounts to merely a quarter of the minimum income needed for single households. Furthermore, only an estimated 35% of seniors receive the pension.

While 7.9% of households with a retired senior describe their living expenses as “comfortable,” 41.7% rated them as “inadequate” and 20.4% as “extremely inadequate”.

Those living in poverty in South Korea increasingly rely on loans to survive. The national household debt recently topped US $971.6 billion, or 81% of the South Korean GDP.

“Before the 1990s, usually younger people supported their parents during their retirement so it was not that serious of a problem,” Ku added in his interview with the NPR. “But elderly people [now] live longer, and younger people also experience economic difficulty.”

In fact, the declining birth rate in South Korea will stymie the ability of the young to meet the demands of a growing population. The most recent Korean Census shows the elderly rose from seven percent of the population in 2000 to 12% in 2013. Experts expect a continued increase as more baby boomers age and retire.

An organizer of the church and mobile soup kitchen services, Pastor Choi Won, also cites the waning of Confucian traditions as a contributor to the elderly poor in an interview with Korea Portal.

“Gone are the days when children looked after their parents,” he said. One in three seniors lives alone in South Korea.

The South Korean government plans to provide more assistance in the future, as the pension system that began in 1988 evolves. Officials predict, “90 percent of people aged 64 and over will receive pension by 2060,” according to Korea Portal.

In the meantime, churches will continue to provide additional assistance to elders who experience poverty in South Korea.