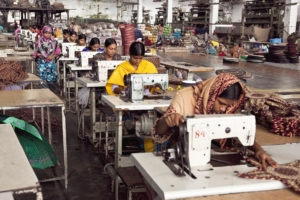 The lack of labor law protection and social benefits, combined with extremely low wages, results in women in South Asia suffering from financial exclusion. Wage digitization can help tackle this issue and encourage financial inclusion in the region.

In South Asia, women make up a disproportionate amount of informal workers and often do not have the protection of any laws or regulations. Many such female workers face issues like low or unpaid wages, unsafe working conditions and lack of social benefits.

Informal work for South Asian women ranges from self-employment in the form of subsistence farmers or street vendors to waged work such as domestic work. However, informal work, which people often refer to as the gray economy, falls outside of labor laws and thus workers do not receive protection. This means the majority of the women working under such conditions have no wage guarantees either. Many are either receiving low or irregular wages, with some not receiving wages at all.

According to World Bank, one of the biggest reasons women in South Asian countries only remain employed in the informal economy is due to the lack of infrastructure available to increase economic opportunities for women. Without educational opportunities and adequate technological training, women are unable to compete for jobs in the formal job market and end up dependent on the informal economy. Other reasons for women in these regions being unable to participate in the economy formally are cultural and societal norms, such as patriarchal social structures, that prevent women from fully participating in the job market. For example, in Pakistan, for a woman to register a business, she must provide a father or husband’s name in front of a witness.

The Benefits of Digital Wages

A way that women in South Asia’s informal economy experience empowerment is through digital wages. Global Findex’s 2021 report, which showed how digital wages have created new opportunities for female garment workers in Bangladesh, stated that although men were more likely to have bank accounts, there has been an increasing trend since 2017 toward financial inclusion for women in lower-income countries. This includes digital accounts and payments of wages digitally.

One of the countries that has benefitted from digital wages is Bangladesh. According to the 2021 Global Findex report, there was a 7% increase in women’s digital account ownership in Bangladesh, which cut the financial gender gap in the country by a third. Apart from allowing female workers to receive their wages, digital wages help companies as well by cutting down administrative costs and time.

Possibilities for the Future

The use of digital wages and the increased financial security that comes with it can help women in South Asia who rely on the informal economy to achieve greater financial freedom. Moreover, the financial awareness that comes with digital wages could particularly benefit the women of the region who traditionally have to give their cash earnings to their husbands or fathers. By having digital accounts and direct deposits, they can obtain a certain degree of autonomy.

The case of Bangladesh proves that financial inclusion through technology can help women’s empowerment; the International Labor Organization (ILO) is already moving to digitize garment worker wages in Cambodia as well. Digital wages can prove to be an efficient and inclusive way of empowering women in South Asia’s vast informal economy.

The Promise to Halve the Poverty Rate in the Philippines“Extraordinary Attorney Woo” Sheds Light on Disabilities in South...
Scroll to top