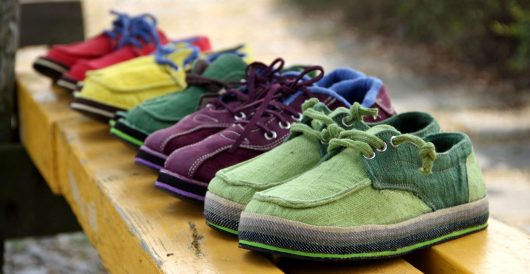 The company also provides employment opportunities for impoverished people within the local community and abroad. Alemu’s goal in starting such an enterprise was to help kickstart Ethiopia’s economy by creating well-paid and sustainable work.

In addition, the company ensures that all of its employees have access to on-site medical checkups and transportation. Africa-Middle East projects that the company will earn over $10 million in revenue this year. SoleRebels will also sell their wares internationally. The shoes will sell in flagship stores and in partnered organizations such as Whole Foods and Urban Outfitters.

Alemu decided to start SoleRebels when she noticed the poor living conditions of artists in her local neighborhood. It all began with nothing more than half-dozen of those struggling artists crafting shoes in a small workshop. However, she quickly expanded her enterprise.

In an interview with Wharton, Alemu said, “We aimed from day one to create, grow and control a world-class footwear brand right from our community that would create ever more jobs and growing prosperity for the workers, and to do this by leveraging the artisan skills of the community and the natural resources of the nation.”

SoleRebels currently remains the only Fair Trade certified footwear company on the market today. This means that they have undergone a rigorous auditing process to determine that all of their products are made in accordance with sustainable working conditions and environmental practices.

In the future, Alemu hopes to expand upon SoleRebels’s mission by building a full scale production facility. However, she assured Wharton, this will not change the organization’s artisan-driven model, which she cites as key to the company’s success.

She explained, “This model will not simply forever end aid dependency, but it will allow Africa to compete in the global marketplace of ideas on our own terms, and at full value for those ideas. And once we do that, then the images associated with Africa will be forever changed in a way that is real and meaningful and tangible.”