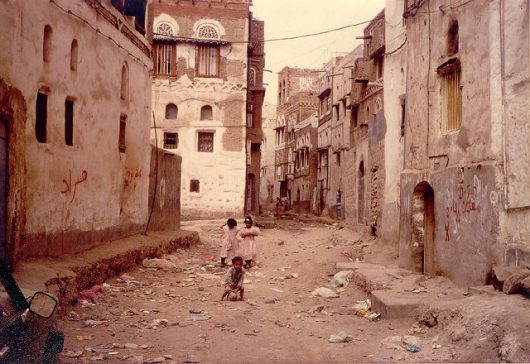 Ranked 160 out of 188 countries on the UNDP Human Development index, Yemen is one of the poorest countries in the Arab World. Ravaged by conflict for the past year and a half, poverty in Yemen has been increasing and will likely continue to do so as conflict is prolonged.

Since Houthi rebels seized the government in 2014, a Saudi-led coalition has been engaged in combat with them. Al-Qaeda in the Arab Peninsula and ISIS have also increased activity opposed to both groups and further serve to increase unrest.

So far, the conflict has resulted in over 6,400 deaths, over 30,500 people injured and 2.8 million people internally displaced. In a country of 25.6 million people, 82% of the population is in need of emergency humanitarian assistance and 19.3 million Yemenis are without safe drinking water or sanitation. At the beginning of the conflict, 14.4 million Yemenis faced chronic food insecurity, but that figure has increased by 35% since the conflict began.

The conflict has also had a significant toll on economic activity. Oil and gas exports, Yemen’s main source of income, have ceased. Imports have also contracted, aside from critical food and energy imports. Inflation reached as high as 30% in 2015, and is expected to increase further as the fiscal performance continues to weaken.

To alleviate the crisis, more than 70 humanitarian organizations have been attempting to provide assistance to those experiencing these conditions. However, limited access and budgets have hampered its ability to reach a majority of the population.

The UNDP initiative, Yemen Our Home, is one of the actors attempting to provide relief to the Yemeni people. Yemen Our Home is trying to garner support for and donors to restore and support community functions such as through a recent deal with Sabafon Telecommunication Company, which created a mobile clinic in the Sho’ub District of Yemen’s Capital City, Sana’a. Other projects that the initiative is attempting to fund and implement include solid waste management in cities, food production and energy.

Even before the most recent conflict, Yemen was one of the poorest countries in the Middle East. Thirty-seven percent of the population lives below the poverty line of $2 a day per person, the concentration of which live in rural areas. Statistics from 2012 indicate that almost 60% of children under the age of five have chronic malnutrition, 35% are underweight, and 13% have acute malnutrition, which are some of the highest rates in the world.

Poverty in Yemen persists in part due to lack of access to basic resources such as land and water and to services such as health care and education. With a majority of the population living in rural areas, their state of isolation makes it even more difficult for people living in poverty to gain access to resources and services.

Such conditions compounded with poor infrastructure prevent humanitarian assistance from accessing those Yemenis in need. Even with a cease-fire signed in March, difficult-to-reach areas are limited in the amount of assistance they can receive.

As long as conflict continues, poverty in Yemen will only increase in magnitude. Restoring peace and order is critical for beginning reconstruction and addressing the issue of poverty.