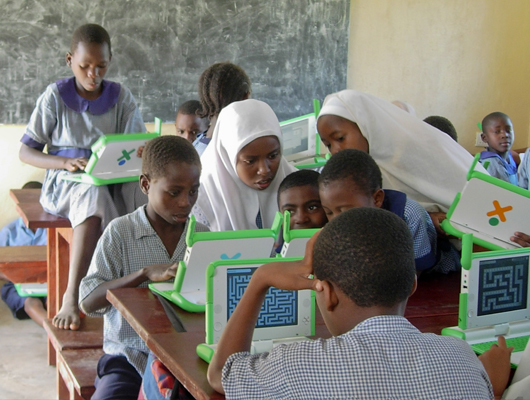 Kenya currently ranks 101st in the world in access to basic information, which includes literacy rates, primary and secondary school enrollments, and gender parity in secondary enrollment. In addition, only 39 percent of the population has internet access.

Safaricom Foundation, an African telco, is looking to change the current landscape by providing every student a school with a room full of computers to boost education in Kenya.

A 20-by-9-foot classroom can hold up to 40 students and be equipped with 11 desktop computers. Each classroom comes with monitors, a server, and a projector. The building is made from local materials to boost local revenues while providing a building with educational value.

Aleutia is a company which builds computers for schools and clinics that are powered by solar panels at a cost of about $20,000. They are currently building solar powered classrooms in 47 villages around Kenya. $10,000 goes toward structural costs and the other $10,000 goes toward the equipment. The solar panels come pre-installed in order to reduce costs.

Two classrooms can be preloaded onto a 40-foot flatbed truck.

Aleutia’s founder, Mike Rosenberg, wants to create local micro-grids that will power communities and allow the power to transfer as needed. So if the school has extra power available it can be transferred to a clinic building that is using more power.

Kenya has made significant progress since 1999 to ensure that more children are getting an education and becoming more literate. They spend on average 6.7 percent of their GNP on education, which is an increase from 5.4 percent in 1999. However, one million children are still not attending school.

Primary education in Kenya is free, but families do not have the money or resources to provide for their children to excel in school and compete globally. The classrooms from Aleutia and Safaricom can reduce the costs for families and help Kenyan children become more competitive on the global level by providing them with resources not available to other parts of the world.

An estimated 20,000 kids will benefit from the classrooms in 47 Kenyan counties that are gaining energy from the sun to provide internet access and learning resources to students.