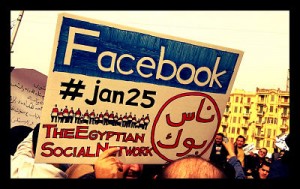 More than two years ago, social media helped Egyptian activists organize massive street protests that lead to the end of President Hosni Mubarak’s reign. With billions of people logging onto Facebook, Twitter and Youtube everyday, it is no wonder that social media has become a celebrated and useful fixture in the voice of the people. However, as quickly as revolutions are sparked, third-party antagonists and governments are sure to falsify what is posted on these sites in an attempt to silence people of opposition. In Egypt, sites that seemed beneficial at the start of the revolution have transformed into venues used to spark violence, hate and oppression revealing the dark side of social media used in social revolutions.

During the Tahrir Square uprising in early 2011, networking websites, like Twitter and Facebook, allowed anti-regime activists to organize mass rallies while providing platforms to articulate political demands. Today, those sites allow a rampant slew of messages focused on provoking anger, hatred and in some cases unsubstantiated rumor. Since the revolution, provocative photos or videos appeared on social media venues which, after eliciting angry reactions, were later proved entirely false or highly exaggerated.

The anonymity of the cyber world is partly to blame for the abuse of social media worldwide and begs the question of validity regarding how effective social media is when used in a full blown revolution. A prominent Egyptian political analyst, Ammar Ali Hassan, notes that one of the main downsides of online social media is the ability of anonymous parties to create fake websites or social media accounts and to issue statements on behalf of political figures or groups that are in fact false. Another explanation of the unbridled use of social media comes from Adel Abdel-Saddiq, social media expert at the Cairo-based Al-Ahram Centre for Political and Strategic Studies. Abdel-Saddiq believes that a significant problem is the lack of legal oversight of social media platforms in Egypt, where “laws against libel and slander only apply to traditional media – i.e., television, radio and newspapers – but not to the Internet.”