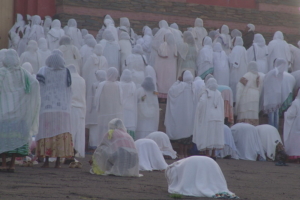 Eritrea is a nation located in the Horn of Africa boasting a population of just under 6 million people. Isaias Afwerki and the People’s Front for Democracy and Justice (PFDJ) have presided over the nation since 1993 having barred independently run news outlets and arrested journalists to crackdown on all opposition against the government. This crackdown had a serious effect on internet access in the country, as barely over 1 percent of the population has internet access as of 2019. While there is currently little information available on whether the Eritream government has plans to rectify this, there are ways that the citizens have made their strides to increase social media interactions in Eritrea and gain information with limited resources.

News Outside of Eritrea

Government official Yemane Ghebremedkel stated on Twitter that 91 percent of households had a satellite carrier as of 2017. However, the Eritrean government has full control of the media in Eritrea and has jammed signals to limit any potential rival service. Alternative news sources have primarily come from outside Eritrea, one of which includes the Paris-based Radio Erena that former Eritrean journalists founded, which provides news about Eritrea without consequence. People in Eritrea proper have limited access, however. The government’s control of media and telecommunication services makes obtaining alternative news sources difficult, largely keeping the populous inline with the nation’s media. Alternative news sources such as Radio Erena serve Eritreans outside of the country but nevertheless provides news that the government currently does not report.

Social media has become a powerful unit in uniting citizens to push movements for change inside Eritrea. Beginning in January 2019, the Twitter movement #EnoughIsEnough began after peace deals emerged between Eritrea and neighboring Ethiopia. People are using the platform as a way to bring forth demands to the Eritrean government to improve the country, most notably, in regard to freedom of speech. The #EnoughIsEnough movement also united voices inside and out of Eritrea, giving citizens a way to stand in solidarity against their government without the concern of physical clashes. The movement that social media powered managed to give a united voice to stand against the government in a more peaceful manner.

Increasing social media interactions in Eritrea has shown the potential to have a powerful effect when used for movements for change. While internet access as a whole is highly restrictive, making access to social media difficult, there are alternative methods for Eritreans to get their news and their government to hear their voices. Progress on Eritrea’s movements have been slow, but it will likely have a powerful effect on both those inside and outside of Eritrea.