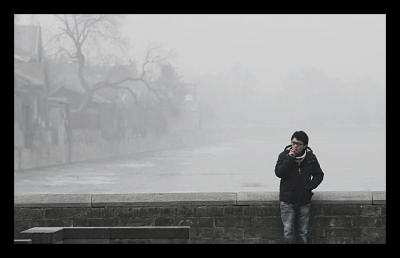 Officials in Shanghai are holding their order that children and elderly persons remain inside their homes, since the outdoor smog levels reached dangerously high levels on Friday December 6.

The Chinese government ordered a stop to construction and for factories to cut production following the warning. Flights were delayed and cars were ordered off the roads due the thick haze reducing visibility to 150 feet in certain areas. The city’s Air Quality Index rose above 500, “beyond index” for the first time in history.

The Air Quality Index is a scale from 0-500; a warning for people to stay indoors is typically given when the index surpasses 200. Two days after the government issued warning, the air was still considered “heavily polluted” by a local monitoring center, with an index rating of 238.

Smog is formed when mono-nitrogen oxides and volatile organic compounds react in the presence of sunlight. The main smog-causing sources are stationary industrial emissions and automobile exhaust. China’s rapidly increasing factory production, coal-burning plants and high use of automobiles are exceeding the few government regulations that are attempting to reduce air pollutants, creating a serious health issue for Shanghai’s citizens.

Shanghai’s dangerous particulate matter (PM) was 14 times higher than the World Health Organization’s recommended daily exposure. In circumstances such as these, health is the main concern. According to an article from National Public Radio, a local resident reported having a headache, coughing, and difficulty breathing while on her way to work.

PM is a complex combination of solid and liquid particles of organic and inorganic substances suspended in the air, affecting more people than any other pollutant according to the WHO. When inhaled, PM may interfere with gas exchange inside the lungs, causing cardiovascular and respiratory diseases after chronic exposure. Outdoor air pollution contributes to an estimated 1.3 million deaths per year, with those in middle-income countries disproportionately suffering.