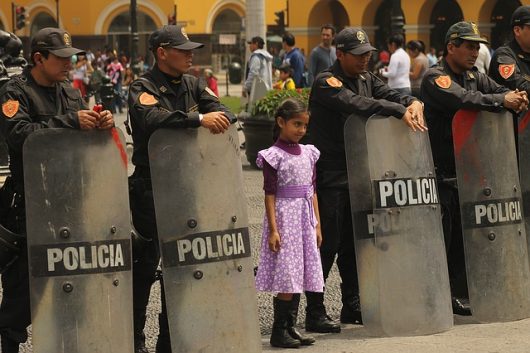 According to the 2016 Trafficking in Persons Report, Peru is a source, destination and transit country for men, women and children exposed to forced labor and sex trafficking. Women, children and indigenous populations are particularly vulnerable.

According to the Walk Free Foundation – an organization that fights against human trafficking, otherwise known as modern slavery – Peru has the third-highest rate of cases of forced labor in Latin America, after Mexico and Colombia. It is estimated that 0.6 percent of Peru’s population, or 200,000 people, suffer from some form of forced labor in their lifetimes. 80 percent of these people are subjected to trafficking involving prostitution.

Forced labor in Peru occurs in many service areas such as gold mining, logging, unregistered factories, organized street begging and domestic service. Mafia and terrorist organizations such as Sendero Luminoso, or Shining Path, recruit children as young as age 11 through social media with the intent to sexually exploit them. Recruiting often manifests through fake employment offers.

Once in the custody of traffickers, victims often are unable to leave due to being held in remote places such as mining camps, the high cost of transportation, the demand for commercial sex and the need to make money. Attempting to escape often results in murder and public body mutilation to act as a warning to other victims.

Online and offline child “sex tourism” is another way victims are trafficked. Americans will pay thousands of dollars to engage in online sex acts with underage girls. In a 2015 arrest of an online child pornography perpetrator, authorities rescued 36 victims, 11 of which were underage and as young as 4. The American police and the Peruvian National Police worked together on this specific arrest. The Protect Act allows U.S. authorities to charge American perpetrators whether the acts occur in the U.S. or abroad.

Human trafficking for the point of sexual exploitation carries a maximum sentence of 25 years in prison in Peru, but corruption often undermines the judicial system. While the government is not doing nearly enough to reduce the prevalence of human trafficking for sexual exploitation, they are making some efforts and many NGOs are picking up the slack.

The Peruvian government has worked to establish specialized, anti-trafficking regional prosecutor offices in Callao, Cusco, Lima, Loreto, Puno, Tacna and Tumbes. It has also increased anti-trafficking operations and arrests, increased efforts to identify and assist victims and has been investigating and convicting sex tourists. Anti-trafficking commercials and posters in airports are another way the government is working to raise awareness.

NGOs have been the true heros thus far in the fight against sex trafficking in Peru. Along with safe homes for women, organizations such as PROMSEX are making great efforts to aid survivors of sex trafficking. PROMSEX is a sexual and reproductive rights nonprofit that has launched an awareness and mobilizing campaign against trafficking. They work to provide legal, psychological and material services for survivors; this includes treatment for sexually transmitted diseases and mental health counselling. As part of PROMSEX’s campaign, they are also working on improving the legal rights of victims, such as not treating victims of prostitution as criminals. They also educate the public on ways to avoid sex trafficking.

While there is still much progress to be made, NGOs like PROMSEX are pillars of hope for the sex trafficking victims of Peru.