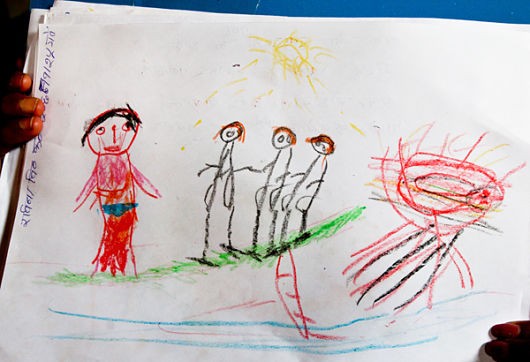 The practice of art has the power to help young children who have faced emotional trauma and devastating tragedies. In countries where severe poverty is persistent, children experience life events that can delay their development and affect their mental health.

Save the Children’s HEART, Healing and Education through the Arts, program has positively impacted the lives of many young children. The concept is that art forms such as drawing, painting, music, drama, and dance can help children express their emotions and experiences in order to improve their emotional well-being and ability to learn.

The program exists in Haiti, Malawi, Mozambique, and Nepal. It has reached thousands of preschoolers and school children. It is often incorporated into existing after school child development programs.

Children in these regions of the world experience stress from their life circumstances of poverty and traumatic events. The following are the stories of three children who have benefited from the HEART Project.

The video of this Save the Children program portrays the stories of some of these young children and how art allowed them to work through feelings that they could not express verbally.