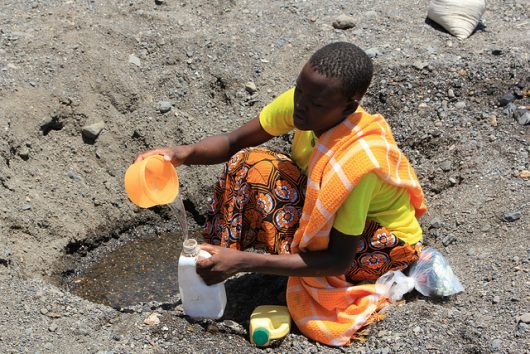 Over the course of the last 25 years, Somalia has suffered a series of devastating droughts. In the most recent one, spanning through 2016 and 2017 there was an absence of rain for three seasons in a row. This drought was particularly devastating in its effects: food scarcity, malnutrition, and the spread of cholera and other diseases.

In 2017 alone, approximately 1.2 million people were acutely malnourished, 80,000 children could no longer attend school and 120,000 children were at risk of dropping out. The crisis in Somalia highlights how the effects of drought and inaccessibility to safe drinking water affects all facets of society.

Lack of access to safe water is a striking feature in almost all parts of Somalia. Only 45% of Somalis have access to improved water sources and this fact increases the risk of outbreaks of waterborne diseases. Cholera is endemic and claims hundreds of lives annually, particularly in densely populated areas. Increasing access to safe water must be accompanied by efforts to ensure the quality of drinking water. Water quality monitoring and house-water treatment, as well as safe storage, are critical in reducing the risk of contamination of water supplies.

Fortunately, a solution is in sight. The International Organization for Migration (IOM) in Somalia is using a coagulant called Polyglu to treat drinking water in Somalia and to assist those affected by the recent drought. IOM helps to protect migrants, refugees and those displaced within their country.

From November 2016 to March 2017, over 600,000 people were displaced within Somalia. Many were forced to leave their homes and livelihoods behind in search of food and water. A startling 8,000 people are being displaced every day. Since safe drinking water is at the center of their displacement, Polyglu offers an effective and innovative solution that could help hundreds of thousands of people, in Somalia but in other countries as well.

Polyglu is a powder, primarily composed of a coagulant made from fermented soybeans, which serves to quicken the clotting of impurities found in water. Polyglu is unique in that is a safe and environmentally friendly purifying agent that has been successfully applied in the food and industrial equipment industries.

One gram of the Polyglu powder is capable of treating up to five liters of polluted water, which makes this powder very effective. It has been successfully deployed in India, Bangladesh, Somalia and Tanzania. In collaboration with IOM and the Internally Displaced Person camps in Mogadishu Somalia has used Polyglu to address water-borne diseases and water scarcity. According to locals in Mogadishu, Polyglu has contributed to lowering the rate of diarrhea and other illnesses among Somali children plagued by all kinds of shortages and war.

While Polyglu has made significant strides in combating water scarcity and water-borne disease in developing countries, much can still be done to ensure safe drinking water in these regions. Although Polyglu can remove many of the pollutants found in water, it cannot completely purify waste water. Thus, it is imperative to allocate more resources to affordable and accessible means of purifying water.

As droughts continue to plague developing countries, Polyglu is just one tool that can be used to ensure access to safe drinking water.