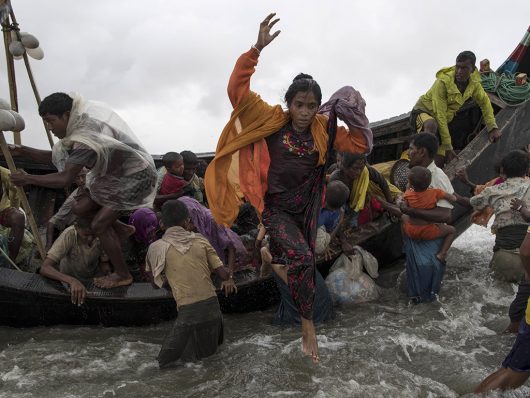 As the world has begun to pay more attention to the refugee crisis concerning Rohingya Muslims in Myanmar, the problem with State Chancellor Aung San Suu Kyi’s response—or lack thereof—has come under scrutiny.

The refugee crisis only illuminates the persecution of Rohingya that has been going on for decades. The U.N. reported that government troops in Myanmar have committed crimes against the minority Muslim population—such as murder, rape and arson—that have made living in their home country impossible.

Furthermore, the Rohingya Muslims in Myanmar have been denied citizenship since 1982, and are not considered to be one of the country’s 135 official ethnic groups.

While the military in the country denies such allegations, thousands of Rohingya have fled Myanmar, hoping to find an escape from the brutality that has taken over their lives. Most Rohingya flee to neighboring countries, but the brutality against the refugees has not stopped, only transitioned from one predator to another. Aljazeera reports that the head of the U.N. International Organization for Migration (IOM) is “concerned” about the violence taking place in Bangladesh against the minority Muslim population, and has every right to be.

The violence is reported to be sexual in nature and gender-targeted, which only solidifies the concerns held by world leaders that Myanmar’s Aung San Suu Kyi is not going to openly oppose the violence being carried out by citizens of her country against the Rohingya. In fact, the State Chancellor has refused to acknowledge the ethnic cleansing for quite some time.

Human rights groups and the U.N. have called on the State Chancellor to take action and stop the senseless murder of Rohingya Muslims in Myanmar.

Unfortunately, the politics of the situation are more complicated than it may seem.

The BBC reports that under Myanmar’s constitution, the military is a very powerful entity that prevents Myanmar from taking steps towards democracy. Despite calls by international leaders and human rights groups for Aung San Suu Kyi to denounce the violence, it is ultimately the military’s stronghold over the government that has prevented her from speaking out.

Still, many believe that the State Chancellor should be stripped of the Nobel Peace Prize that she was awarded in 1991.

Finally, after an unusual period of silence, the State Chancellor addressed the violence. Amid the confusion and horror that has become everyday life for the Rohingya Muslims in Myanmar, Aung San Suu Kyi has stated the Rohingya will be allowed to return to their home country.

The road home is seemingly far-off—a result of the military’s targeted violence towards their homes, crops and other resources essential for the Rohingya’s survival in Myanmar. However, many in the international community believe the recent attention drawn to the ethnic cleansing will have a positive effect and save the lives of those who need help.

For this reason, it is imperative that the world does not forget about the genocide occurring against the Rohingya Muslims in Myanmar. The international community must pay attention and provide any support necessary.