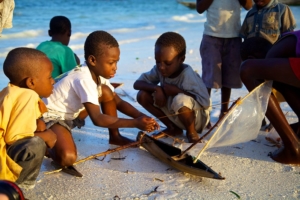 In an interview with The Borgen Project, Eric Peasah, founder and executive director of Right To Be Free (RBTF), speaks about the organization’s commitment to the prevention of human trafficking with a special emphasis on women and children in Ghana. His work not only lifts up the most marginalized and vulnerable but is also successful at a political level — Peasah played an important role in the development of Ghana’s Human Trafficking Act, among other efforts.

Peasah says that the organization’s mission is to make the world a better place for everyone. RTBF directly supports the “rescue, rehabilitation, reunification and reintegration of victims of human trafficking” and other exploitative conditions.

Further, modern-day slavery is far more widespread and in need of urgent action than the world may be aware of. To illustrate, the U.S. has a total population of 320 million, out of which more than 400,000 are enduring conditions of modern slavery. In Ghana,  more than 130,000 live in modern slavery out of a total of 30 million. Of all the children trafficked in Ghana, an estimated 60% have been trafficked on Lake Volta, one of the hotspots where Peasah has worked.

Founding of Right To Be Free

Peasah says he was supposed to become a lawyer long before he started working as a social worker full-time. Instead of studying law, he went to school for social engineering and part of his studying would take place outside of the classroom, on the streets.

Wanting to go into the areas most affected by poverty, he conducted a six-month academic project on the streets of Ghana where he worked for the International Organization for Migration near Lake Volta. Peasah and his team “identified trafficked children working on and along the lake as fishing children, cattle herdsmen or domestic servants in the villages.” A quickly assembled team found that these children were in most cases trafficked by their parents – with and without consent – to support their respective households. In response, Peasah and his team established a program to rescue these trafficked children, marking the beginning of Right To Be Free.

Peasah says, in his view, that the two biggest problems contributing to human trafficking are extreme poverty and ignorance. In terms of Africa, it is also the lack of employment and lack of opportunity that makes trafficking so widespread. He explains that children who lack perspective or a financial support network at home, especially girls, are more susceptible to lures of a better life in Kuwait, Qatar and the Gulf countries through potential jobs as domestic servants.

Right To Be Free follows the four Ps: “protection, prevention, prosecution and partnership” in order to foster genuine and sustainable improvement. Annually, RTBF staff members work with local villagers to raise awareness of the dangers of human trafficking.

Staff members also teach local fishermen about the legal and social consequences of child labor and provide alternate fishing methods or occupational training. Peasah points out that many parents genuinely believe their children may have a chance at a better life and send their children off based on false promises made by human traffickers.

Once children are rescued from oppressive conditions Right To Be Free tries to rehabilitate them and later integrate them back with their families. Where necessary, Right To Be Free provides micro-loans to victims’ parents or guardians to support them financially while simultaneously monitoring them. Right To Be Free facilitates education programs, either in the shape of community schools or as a course to teach women skills valuable for future employment.

The Link between Human Trafficking and Global Poverty

“Every country whether that is Ghana, Liberia, Pakistan, or Egypt has its unique answer to the root of human trafficking, yet the one unifying tie is that all people in those areas lack something. Poverty and trafficking 100% have a link.” Children are taken out of school by their parents to help with the family income, which results in a lack of education and vulnerability to trafficking. If the same parents had wealth, there would be no need to take children out of school and they would be apprehensive of the dangers of trafficking.

Peasah revealed that he would like to initiate a program where children who are currently suffering in silence can have a rescue line they can call. He says that rather than only working with the parents, it is just as important to give continued support to the children as well. Further, Right To Be Free plans on building more schools for communities over the coming years to educate children and parents on the dangers of trafficking.