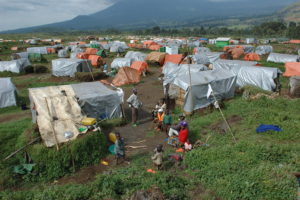 Refugee camps house people who had to migrate as a result of unsafe conditions in their home countries. Displaced people hve to leave everything behind in order to find safety. Recently, the United Nations reported that two refugee camps in Ethiopia were on the verge of running out of food. The refugees, dependent on organizations to bring them that food, were at risk of starvation.

What is Happening in Ethiopia?

Conflict has enveloped the Tigray region of Ethiopia. In November 2020, The Tigray People’s Liberation Front and the government began fighting. Two refugee camps in this region containing 24,000 refugees recently could not access aid. About 170 food trucks transporting the necessary food supplies ended up in the Afar region and were unable to move. Without these resources, the refugees will likely starve.

The United Nations High Commissioner for Refugees (UNHCR) is working to relocate the refugees. They are also trying to ensure safe travel out of the camp by discussing the issues with Tigrayan authorities.

The Increase of Refugees

The amount of refugees and displaced people around the world is higher than ever. As of 2020, the world had the largest refugee population ever recorded. About 25 million people experienced displacement, including 11 million children. This has only made conditions in refugee camps worse, as overcrowding compounds with a lack of resources.

The Problems with Refugee Camps

Displaced people who come to live in refugee camps often have nothing. They have no income, few to no possessions and no food. They rely entirely on what humanitarian organizations can provide for them. Unfortunately, what organizations can provide often falls short of what is necessary to survive. Two main problems that refugee camps deal with are inadequate food and water. The malnutrition and dehydration that occurs in refugee camps increase the risk of disease, like diarrhea and cholera, for the people living in the camps. Improving amounts and access to food and water will help to improve health conditions at refugee camps.

The UNHCR recommends at least 2,100 calories and 20 liters of water per person per day. However, in 2006, refugees in Tanzania received only 1,460 calories per person per day. A 1987 study of a Thailand camp showed that 30% of the camp’s population suffered from malnutrition. The UNHCR also estimates that more than half of the refugee camps across the world are unable to provide refugees with the 20 liters of water a day that they need.

Part of the problem with water is that it must also be accessible to all people in the camps. One way the UNHCR aspires to provide this is by ensuring there are water taps within 200 meters of every household. This way, individuals do not have to travel long distances to retrieve water, burning the already limited amount of calories they have.

There are a few things that can improve living conditions at refugee camps around the world. One important way is to begin to place a higher emphasis on making camps a long-term solution. When a refugee experiences displacement for more than five years, the UNHCR calls their situation a protracted refugee situation. Currently, two-thirds of refugees live in a protracted situation and the time they spend in this situation increased to 20 years. This means that more people live in camps for longer periods of time.

If displaced people are living in camps for such extended periods of time, then they are no longer temporary placements. This translates into a need to make refugee camps more permanent and more equipped to support people actually living there. The construction of more permanent housing, rather than tents, and fully functioning toilets and showers would help achieve permanent living conditions.

Camps can also allow refugees to set up businesses like barbershops and fruit stands. Some camps in Bangladesh currently allow refugees to farm patches of land to grow fruits, vegetables and spices. This is another way to increase food production and better conditions in the camps.

The struggle will continue to ensure that people living in refugee camps have enough resources to adequately survive and have livable conditions in camps. Transporting goods becomes especially difficult in war-ravaged regions. Roads are unreliable and food trucks are vulnerable to attack. Displaced persons, however, often have nowhere else to go and deserve for the world to put in its best effort toward helping them. This can begin with creating refugee camps as more permanent establishments, as cities and homes in and of themselves.