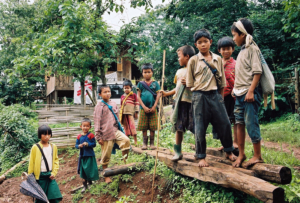 Previous Use of Child Soldiers

According to the Child Soldiers Global Report 2001, 20% of Myanmar’s army was made up of children younger than 18. Although Myanmar’s legislation does not establish compulsory military service laws, it does require each district to meet a recruitment quota. District authorities that fail to meet the quota often receive fines. Hence, to meet the quota, many underage children are coaxed into joining the army through financial rewards or prestige. Other times, the army abducts children from public areas, forcing them to become soldiers. The highest number of recruited child soldiers in Myanmar occured between 1990 and 2005 when the military junta was in power.

During this time, Myanmar received several on-ground assessments by the Committee of Experts of the ILO, followed by recommendations to revise the Village Act and the Towns Act. The Committee requested that the government amend these Acts to comply with the Forced Labor Convention of 1930. Hence, the Convention on the Rights of the Child was ratified by Myanmar in 1991.

After several concerns raised by the United Nations, Human Rights Watch verified that Myanmar had approximately 70,000 child soldiers in 2001. Myanmar’s government responded to international concerns in a letter to the U.N. Security Council in 2004. In the letter, the government demonstrated no interest in making any legislative amendments nor any intention to prosecute local authorities for forced labor and child abuse by stating that “the Myanmar Armed Forces is an all-volunteer force and those entering military services do so of their own free will.”

In 2012, Myanmar signed the Joint Action Plan. This committed the government to work alongside the U.N. to prevent child recruitment. Following the Plan’s implementation in 2012, which established stronger age assessment procedures and the adoption of military directives prohibiting the recruitment of minors, 956 children and young people were released from the army. Further improvements occured in 2015 when Myanmar signed the Optional Protocol to the Convention on the Rights of the Child regarding the use of minors in armed conflict.

Since then, Myanmar’s government and the U.N. have launched several public awareness campaigns, also establishing a hotline so that citizens can report cases of recruitment of minors. As a result of the continuing decrease in child recruitment and Myanmar’s efforts to protect children, U.N. Secretary-General Antonio Guterres removed Myanmar from his annual “list of shame,” which names countries that have committed grave violations against children.

The Need for More Action

Despite Myanmar’s recent efforts to decrease the number of child soldiers, in 2021, the United Nations verified the recruitment and use of 790 children in the previous year. With 56 children dead and 17 children abducted, the U.N. believes Myanmar will return to the “list of shame” unless the government follows U.N. recommendations, including:

With 10 armed attacks in national schools in 2020, the United Nations also strongly recommends that Myanmar endorses the Safe Schools Declaration, which requires states to commit to safeguarding schools and universities from armed hostilities.

Existing efforts as well as implementing U.N. recommendations will help to fully eliminate the use of child soldiers in Myanmar, protecting the well-being of children across the country.