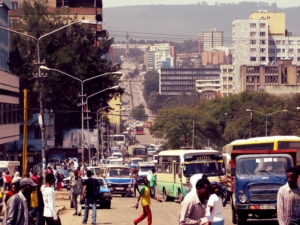 Ethiopia is set to become the first low-income sub-Saharan African country to achieve one of the U.N. Sustainable Development Goals of eliminating poverty by 2030. Tremendous efforts have been made to reduce poverty in Ethiopia. The poverty rate fell from 44 percent in 2000 to 21 percent in 2018. An estimated four Ethiopians escape poverty every minute. Infrastructure developments and continued growth in the agriculture and service sectors helped bolster the nation’s economy and improve living conditions for its people.

The Government of Ethiopia (GOE) has been heavily involved in the development of its economy. Infrastructure projects, such as roads, national parks, power production and distribution, airports and railways have bolstered growth and created jobs. The Addis Ababa-Djibouti Railway is a major international railway inaugurated in 2018 that runs from the capital, Addis Ababa, to the port city of Djibouti. The railway remains an important mode of transportation for passengers and freight. Aschale Tesfahun, a political science lecturer at Dire Dawa University, noted that “[his] life has become easier because of this train, but it’s also a major advantage for all Ethiopia.”

Even external investors, such as Zhang Huarong, find developing African countries like Ethiopia to be lucrative opportunities. Huarong emigrated from China to create a shoe business in Ethiopia. He employs more than 7,500 locals who produce footwear for companies such as Guess and Nine West. His goal is to create 100,000 jobs for Ethiopians. External investors providing jobs for the local population is one way of indirectly reducing poverty in Ethiopia. China has created more than three million jobs on the African continent in markets such as manufacturing, trade, real estate, services and construction.

Another important contributor to Ethiopia’s real GDP increase is energy production and distribution, which has averaged about ten percent growth between 2006 and 2018. Ethiopia struggles to provide electricity as its population is more than 100 million people. The nation is creating more hydropower plants to keep up with the fast-growing economy and plans to increase power production from 4,500 MW to 5,000 MW by 2022. About 90 percent of power in Ethiopia is generated from hydropower plants.

The Grand Ethiopian Renaissance Dam has been under construction since 2011 and is expected to be the largest dam in Africa. The power source will generate 6,450 MW of electricity and functions as a major factor in the economic growth of Ethiopia. It is also anticipated to export 400 MW of electricity to Tanzania and 400 MW to Kenya. About 30 percent of Ethiopians have access to electricity, yet the dam and several hydropower projects will provide a larger portion of the country with power.

Ethiopia serves as an excellent model to other impoverished countries for poverty reduction and successful economic development. Poverty in Ethiopia was sliced in half within 20 years. Infrastructure developments and external investors, particularly China, have furthered its progress in improving its economy and progressing with 1.1 of the Sustainable Development Goals—reducing poverty.

Other developing African countries could learn from the failures and successes Ethiopia has endured while becoming a leader in Africa’s development and innovation. For example, Ethiopian Airlines is the fastest growing and most profitable passenger and cargo carrier in Africa. The airline expresses that infrastructure development is a main driver in developing an economy, especially when there is room for growth. Former head of the U.N. office in Ethiopia, Eugene Owusu, stated that Ethiopia’s fast development “reflects the bold ambition and the political commitment of the leadership.”

The last challenge Ethiopia faces is transitioning from an agricultural-based economy to an industrial-based economy. Although the idea is simple, execution sometimes includes decades of evolving and continued external investment from investors that might be blind or wary to potential future profitability. Structural changes to the Ethiopian economy are necessary for further progress in reducing poverty in Ethiopia. With government initiatives, such as improving access to clean water and sanitation services, the economy will continue to grow and eliminate poverty in Ethiopia.