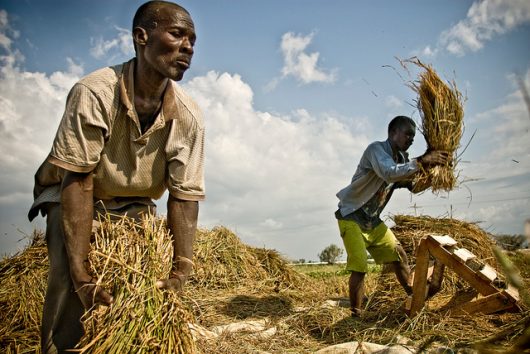 Since 2011, Oxfam Livelihoods Program has been influential in Haiti’s Artibonite Valley, working with rice farmers in the region. Due to extreme food insecurity, a vast majority of families in Haiti rely on local agriculture for survival. Oxfam’s Haiti Livelihoods Program aims to increase rice production, improve production techniques, empower local farmers and decrease food insecurity in this small country.

The poverty rate in Haiti falls just below 60 percent, with 24 percent of Haitians living on less than $1.23 per day. Only 6 percent of the Artibonite Valley’s inhabitants are unaffected by hunger, and 43 percent are extremely food insecure.

This is in large part due to the natural disasters that plague the country. Within the last ten years, Haiti has experienced hurricanes, floods, droughts and an earthquake, ranking fifth among countries most likely to have a natural disaster. Approximately 98 percent of the nation is at risk to experience one or more of these disasters, as well as epidemics. A lack of sanitation and health services increases the risk of fecal waterborne diseases, including cholera.

Oxfam began its Artibonite Valley Livelihoods Program in 2011 following the earthquake that struck the country the year before. Up to 80 percent of the nation’s rice is produced in this valley, making its success and growth crucial to reducing food insecurity in Haiti. Additionally, food production, processing and marketing are essential components of Haiti’s economy, employing more than 70 percent of the population. Oxfam states that they are helping Artibonite’s residents to “overcome barriers and realize the potential of the valley.”

The program relies on partnerships with local organizations, including government agencies, NGOs and microfinance institutions. Oxfam has been working with the Ministry of Agriculture to ensure that program accomplishments have long-lasting effects.

The System of Rice Intensification

The SRI is a critical component of improving farming systems around the world, enabling farmers to produce more food in a way that is cost-effective and sustainable, using less water, seeds, fertilizer and labor. This increase in production helps meet local food needs, helping to reduce food insecurity in Haiti. SRI also decreases pollution and the negative effects agriculture can have on the environment. Farmers in Madagascar, Vietnam, Cambodia, India and Mali have adopted SRI methods.

Recommended SRI practices include spacing rice seedlings farther apart and transplanting them when they are young to reduce crowding and strengthen root systems, using integrated pest management instead of herbicides, applying water intermittently rather than continuously, using organic matter to enrich the soil, aerating the topsoil and removing weeds with manual weeders.

As SRI requires no additional machinery and farmers can easily make site-specific adaptations that will meet their needs, SRI is affordable for small-scale farmers, in addition to being environmentally friendly and aiding in the reduction of food insecurity. An evaluation of the Livelihoods Program from 2011 to 2014 found that SRI had succeeded in more than doubling rice production in some farms.

The Artibonite Valley Livelihoods Program also employs other methods for transforming Haiti’s environment and improving conditions for its inhabitants. Oxfam has been facilitating networking across geographic areas to improve cross-learning and coordinating, improving the technical, business and administrating capacities of community organizations, raising awareness among Haitian consumers on the importance of local production and supporting the newly developed National Federation of Haitian Rice Producers.

Oxfam also addresses gender inequality in Haitian agriculture by ensuring women are participating in all activities and by holding workshops on gender issues, advocacy and campaigning. In 2014, the program was found to have improved women’s roles in the public and economic spheres and increased their decision-making within their households.

Possible improvements of the Program

The 2014 evaluation of the Livelihoods Program did, however, note a few areas in need of improvement. First, the program did not help increase the competitiveness of the goods produced, causing farmers to have continuing difficulties selling their products. The program also did not provide solutions for access to fertilizers, seeds and irrigated water.

Recommendations for program improvement include ensuring all projects are locally-appropriate, increasing the adoption of SRI by working with the Ministry of Agriculture and distributing data on SRI techniques, creating a reliable system to monitor crop yield and looking for more efficient and affordable farming equipment.

Overall, Oxfam’s Artibonite Valley Livelihoods Program has made great strides in improving rice production and continues to be an integral part of decreasing food insecurity in Haiti and improving the overall livelihoods of its residents.