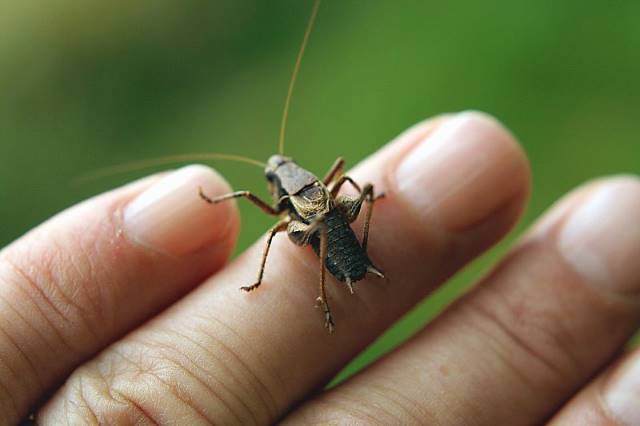 Esnath Divasoni is changing the game when it comes to how the world thinks about food and sustainability. The 33-year-old rural Zimbabwean “edible-insect farmer” is promoting the cultivation of crickets and other types of insects as a source of nutrition and sustenance that could help reduce food insecurity in Zimbabwe and across sub-Saharan Africa.

Divasoni’s journey to becoming an insect farming expert is a long and impressive one. Thanks to CAMFED, a pan-African non-governmental organization that campaigns for marginalized females to receive strong educations, Divasoni was able to attend secondary school. CAMFED also enabled her to later attend EARTH University in Costa Rica.

She was the first person from her village to travel abroad to receive an education. EARTH University served as a jumping-off point for Divasoni, who studied agricultural sciences at the school in San José, Costa Rica. There, she discovered the potential of insects in combating food insecurity in developing nations.

Divasoni grew up collecting insects in plastic bags and picking worms from trees around her family’s farm. Loving the taste of insects herself, she began to research how she could turn bugs into a reliable food source. She has since received funding from The Resolution Project, a nonprofit that funds, mentors and supports young leaders with global, innovative ideas, for her project that she calls Jumping Protein.

The practice of harvesting crickets brings with it a plethora of benefits, the primary benefit being nutritional value. More protein-rich than beef or chicken and low in fat, 100-200 grams of crickets can feed and nourish a family of four to five. With Divasoni’s market rate of $1 for a 50-gram pack, Divasoni’s cricket endeavor brings in an income to reduce poverty all while aiding those suffering from food insecurity in Zimbabwe.

Unlike locusts, since crickets are incapable of flight and have many natural predators, increasing the number of crickets in a local ecosystem does not pose any biological risks. Locust plagues can decimate crops, a phenomenon well-known in Africa, but with crickets, the risk level is much lower. Cricket farming is both cost and space-efficient, and in addition, cricket excrement can be used as fertilizer.

Divasoni’s cricket farm is now up and running. She has around 20 plastic washing tubs, which she uses as feeding containers for the insects. The bugs take between five and eight weeks to mature, at which point Divasoni collects their eggs for the next cycle before harvesting around one kilogram of crickets per tub.

Food insecurity in Zimbabwe is a pressing issue, especially in the country’s rural areas. In 2019, estimates from the Zimbabwe Vulnerability Assessment Committee calculated that roughly 5.5 million people in Zimbabwe’s rural areas were food insecure during the countries peak “lean season,” which occurs between planting and harvesting periods.

Through insects, Divasoni hopes to alleviate the hardship of food insecurity that afflicts millions who grow up in rural villages. Since the project is in its earlier stages, data is limited on the full impact of the Jumping Protein initiative. There is plenty of room and opportunity for growth across Zimbabwe and beyond. The “global edible insect market” is estimated to reach close to $8 billion by the year 2030.

Divasoni is multiplying her impact through teaching with the help of CAMFED. She is one of the core trainers in the CAMFED Agricultural Guide program, which has led hundreds of training sessions in eight rural districts across Zimbabwe. These sessions specifically focus on women, empowering them with innovative farming techniques like insect farming. All of the resources needed to start a farm like Divasoni’s are available locally for many Zimbabwean farmers.

Practices and innovations like cricket farming could revolutionize the entire concept of agriculture in areas with high food insecurity in Zimbabwe. Thanks to various nonprofits that invest in global aid in underserved areas, Divasoni was able to make Jumping Protein a reality. Through the perfect blend of agricultural education, local knowledge and commitment to her community, this project has the potential to feed an entire nation.