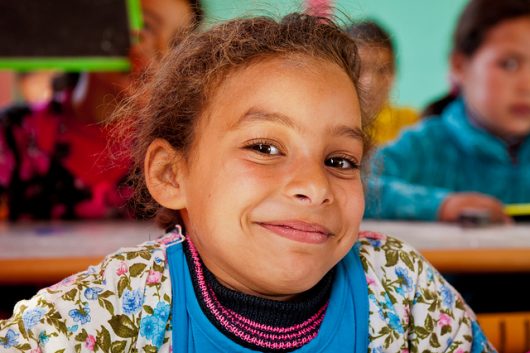 The importance of education in lifting a country out of extreme poverty has been well established. Specifically, girls’ education promotes gender equality, raises wages and results in smaller, healthier families. There is an unprecedented increase in girls finishing primary school, allowing them to get educated alongside their male peers.

Income Levels and How they Affect Girls Finishing Primary School

One hundred percent of girls in Oman finish primary school. Primary school starts at age 6 and continues until age 18, and girls can go to one of 1,045 schools as of 2011. However, back in 1973, when Oman was a Level 1 country, there were only three primary schools with no girls attending them at all. Oman has experienced phenomenal advances in both poverty reduction and girls’ education.

Sultan Qaboos bin Said ascended the throne in 1970 and did not like what he saw. He vowed to improve life for the Omani people. This included, among many other things, opening more schools and allowing girls to attend them. Additionally, he made public school free, allowed private schools to exist and created a comprehensive kindergarten curriculum. With the availability of free education for girls, 100 percent of girls attend and complete primary school.

The Iraqi school system is far from ideal. Uneducated girls, when asked why they do not attend school, cite abusive teachers, poverty, the presence of boys and concerns about domestic and national safety. Those who do go to school endure dirty bathrooms, a lack of clean drinking water and the aforementioned abusive teachers. Despite this, there are enough girls finishing primary school in Iraq to keep the country out of extreme poverty in the next generation.

In Morocco, 94.7 percent of girls finish primary school. This is a stark increase from 22.9 percent in 1972. After King Mohammed the Sixth ascended the throne on July 30, 1999, he began placing more focus on the education of his people. His efforts have impacted girls more than boys, as shown by the fact that only 9 percent of girls have to repeat any grades in primary school, which is less than the 13 percent of boys who have to do so. Although this has done little to improve women’s reputations as workers thus far, it is still a victory for the country.

In Myanmar, 89.3 percent of girls finish primary school. This number was only 30.8 percent in 1971 for a simple reason: extreme poverty. While schooling itself is technically free, parents still need to pay for uniforms and supplies, and boys are favored over girls in terms of whom parents will spend money on. Sometimes, girls as young as 4 years old are sent to schools in Buddhist monasteries, which means being separated from their families.

However, help is being provided by the international community. Educational Empowerment is an American organization dedicated to promoting educational equality in Southeast Asia. It develops and supports schools in Myanmar, publishes books, and gives microloans to mothers to help get their daughters into school. This has helped girls catch up to their male peers and finish primary school.

For girls, getting an education has historically not been an easy task. Between the cost of school attendance, the existence of extreme poverty and general gender inequality, girls often fall behind their male peers when it comes to receiving an education. However, thanks to new government rulings and help from nonprofit organizations, there are now more girls finishing primary school than ever before, and the number is set to rise even higher. In the near future, girls’ education will be on par with that of their male counterparts. This is important because educating girls leads to educated women, and educated women can help lift a country out of extreme poverty.