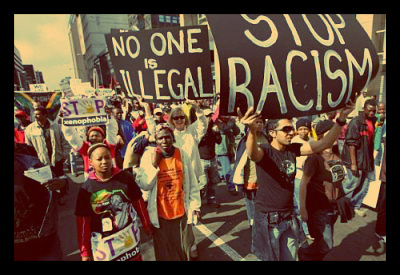 With the abolishment of apartheid came new possibilities: for black and white South Africans to coexist bearing the same rights and allowed the same opportunities. However, 19 years later, racism in South Africa still segregates socially and economically, hindering the opportunities for many to escape the burdening shadow of the apartheid.

During the apartheid, whites were given a systematic advantage; they were the only ones allowed to vote; allowed a higher standard of living with the segregation of schools, hospitals, housing and leisure facilities; they also benefited from having the most skilled jobs reserved for them.

This dramatic disconnect between blacks and whites created a social divide that still exists today, 19 years later. This social divide contributes to inequalities, unemployment and pockets of deep poverty suffered by many black South Africans, the majority of which reside in rural areas. Because of the strong correlations between race and rural location, and rural location and high levels of poverty, this leaves black South Africans in rural areas at a disadvantage to obtain the same education and job opportunities.

Although the income differences have narrowed in recent years, a large income disparity still exists between the two groups, with black South Africans making $65,000 less, on average, than white South Africans.

Isolation may also be a contributing factor to the racial attitudes expressed by South Africans. Socially, South Africans still harbor racial differences. An annual survey by the Institute for Justice and Reconciliation (IJR) revealed that 43.5% of South Africans rarely or never speak to someone of another race.

Class and racial disparities that are present today impede development efforts for the nation as a whole. South Africa isn’t able to truly escape the effects of the apartheid with the racism that lingers in the country.

George Lucas and Charitable GivingSpread Some Love
Scroll to top