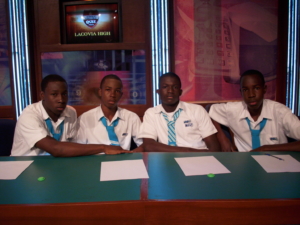 Students from 64 different high schools across Jamaica spend all year studying song lyrics, historical figures and other trivia facts as they gear up to compete in the annual Schools’ Challenge Quiz (SCQ). It is a quiz show in Jamaica that has become a nationwide television phenomenon.

Winners of the quiz show receive an award of thousands of dollars in college scholarships, giving them the opportunity to go to college. This year, St. Jago High School emerged victorious against the 11-time quiz champion, Kingston College.

St. Jago High School is located in Spanish Town, St. Catherine, Jamaica. Many know Spanish Town for its high crime rates and prevalent gang activity. Spanish Town has one of the highest crime rates in Jamaica and incoming travelers should avoid it. In January 2018, the Jamaican government declared a State of Emergency in Kingston Metropolitan Area and also warned visitors to avoid Montego Bay and Spanish Town due to violent crime and gang activity.

Schools in Jamaica are prime recruiting grounds for gangs. Gang involvement within the youth in Jamaica is prevalent, especially in inner-city schools such as St. Jago. Youth are also at risk of becoming homicide victims. In 2013, 79 percent of all homicides were due to gangs, 97.3 percent of people that received arrest for murder were males, 84.8 percent of these suspects were age 35 or younger and more than 51 percent of victims were 35 and younger.

Team building and educational activities are the key deterrents from violence in this area, and the SCQ has promoted a positive, educational alternative to gang involvement for St. Jago students. Students often stay at school after class to practice for the quiz, preventing them from encountering gang affiliates on the streets after school. Furthermore, the SCQ team in St. Jago has formed a community among the students that many young individuals lack in impoverished communities.

Though primary and secondary education has been increasingly accessible after major education reform in Jamaica, academic achievement has remained relatively low. In 2009, more than 24 percent of students entering primary school did not master any national assessments. Recently, Jamaica ranked 54th out of 149 countries in education, according to the Legatum Prosperity Index, which assesses countries based on access to education, quality of education and human capital. Furthermore, tertiary education in Jamaica is rare. In 2017, the college graduation rate was 6.2 percent despite a 79.7 percent high school graduation rate.

The effort and hard work students put in every day to win the SCQ competition can foster academic achievement, and winning the quiz show in Jamaica provides high school students a chance to pursue higher education.

Many young Jamaicans are out of school because either they cannot afford to pay for school fees and supplies or they do not have any access to education. In 2017, 27,535 adolescents were out of school, and gross enrollment rates have declined from 91.62 percent in 2011 to 82.37 percent in 2017. These young individuals do not have the privilege to go to high school or pursue higher education, therefore, they are less likely to find jobs.

To alleviate this issue, the International Youth Foundation (IYF) launched the Caribbean Youth Empowerment Program (CYEP) initiative. The CYEP is a youth empowerment program in Jamaica that focusses on training young individuals in technical, vocational, entrepreneurship and life skills. So far, more than 490 companies have offered graduating students opportunities, like mentoring and internships and 94 percent of companies have hired interns and employees after receiving reports of satisfaction from CYEP.

In addition to the quiz show in Jamaica, Television Jamaica—a major television network and the host of the SCQ— is offering one SCQ participant $500,000 each year to fund his or her tertiary education and a three-week internship at TVJ. To be eligible for this scholarship, an SCQ participant must fill out an application, write a 700-word essay, maintain a minimum GPA of 3.0 and have two teacher endorsements.

After 50 years of the SCQ, it has remained the most popular TV show in Jamaica and has been integrated into its culture. The country celebrates quiz alumni. The SCQ is a medium for Jamaica’s entertainment and educational success. It has created a platform for students across the country to exercise their team-building skills, dedication and sportsmanship, as well as show off their school pride.