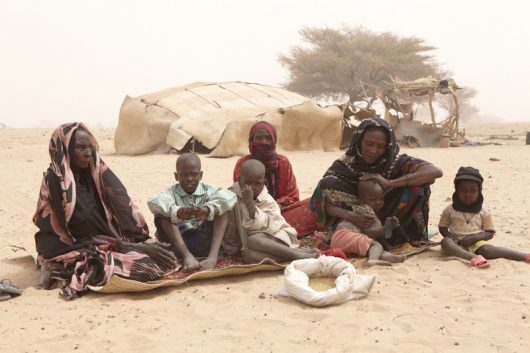 The degree of the risk to get infectious diseases in Chad, the biggest landlocked country on the African continent, is critically high. Typhoid, cholera, malaria and hepatitis E tend to become more widespread in the rainy season.

Chad’s population continuously grows due to the country’s high fertility rate and a large youth cohort. More than 65% of the populace is under the age of 25, although the mortality rate is high and life expectancy is low. Diseases in Chad caused the world’s third-highest maternal mortality rate. According to UNICEF, 33% of children between 12-23 months are not vaccinated against childhood diseases.

Among blood or waterborne diseases in Chad, the most concerning are bacterial and protozoal diarrhea, hepatitis A and E and typhoid fever. Vector-borne diseases such as malaria and dengue fever, water contact disease schistosomiasis, respiratory disease meningococcal meningitis and some of the animal contact diseases including rabies had a large outbreak in 2016 and are also among the most threatening. In the past decade, Chad has faced epidemics of meningitis, measles and cholera with increasing severity.

Doctors Without Borders (MSF) identified the first hepatitis E cases and treated 885 patients with Acute Jaundice Symptoms (AJS), with numbers increasing to an average of around 60 new cases a week. AJS commonly causes the yellowing of the skin and eyes, which can indicate if a person has hepatitis E. In total, 45% of cases tested positive for hepatitis E. Since September 2016, 11 have died, including four pregnant women among hospitalized individuals, but the fatality rate could be underestimated. Nearly 90% of the AJS cases were reported from Am Timan which appears to be the epicenter of the outbreak.

The government of Chad officially declared a cholera epidemic on August 30, 2010. In January 2011, the number of cases started to increase again and during September, 4,410 cases and 83 deaths were reported. The high mortality rate appeared due to the weakness of the monitoring system, the lack of appropriate health strategies and of access to health services for patients and the poor quality of existing health services.

As with some other diseases in Chad, cholera appears during the rainy season in the regions surrounding the Lac Chad. In 2014, 172 cases of cholera were notified in the regions of Lac, Mayo Kebbi and N’Djamena. In 2016, no cases were notified. Given the low levels of access to a sustainable water source (only 52% of Chad’s population have access) and improved sanitation (12%), it is likely to be a continuous problem.

In 2016, more than a million cases of malaria were notified among other diseases in Chad. UNICEF and the World Health Organization have launched a distribution of bed nets, medicines, malnutrition treatment for children under five and stimulated prenatal services such as vaccination and preventive malaria treatment.

The causes of malaria are dirty water and garbage that become the nests for mosquitoes. More important, even with vaccination, is to use nets, especially covering children’s and elders’ beds, as the disease affects them the most.

Travelers to Chad should follow standard hygiene recommendations in terms of water and food safety. These should protect them against hepatitis E, as the risk of person to person transmission is very low. In order to control these epidemics and reduce morbidity and mortality rates associated with cholera, malaria, yellow fever, measles and meningitis outbreaks, UNICEF in collaboration with Chad’s government plans to launch mass vaccination of the entire population and returnees of all ages to prevent further spread of epidemic diseases in Chad.

How Many Africans Live in Poverty?Poverty Rate in Aruba
Scroll to top