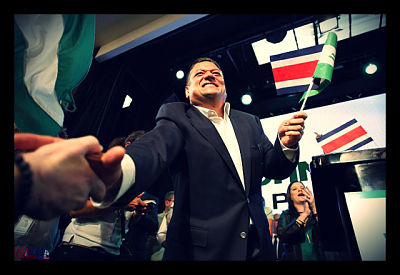 Recent presidential elections in Costa Rica failed to define a new president as no candidate received the amount of votes necessary to avoid a runoff election.

A former foreign ministry official, Luis Guillermo Solis, a member of the Citizen’s Action Party (PAN), led the polls with 30.9% of the vote.

Johnny Araya, a former mayor of San José from 1998 to 2001 and a member of the incumbent National Liberation Party (PLN) arrived in second place with 29.6% of the vote.

Lastly, Jose Maria Villalta, an environmentalist, received 17.2% of the vote.

Mr. Araya was expected to be the front-runner prior to the elections, but an ongoing investigation into an embezzlement case during his tenure as mayor and a gaffe over underestimating the price of milk alienated voters.

Solis ran on an anti-corruption platform and swore to improve the nation’s infrastructure, as well as to revamp the country’s social security system.

Araya pledged to reduce poverty and framed his party as the safer, more responsible choice for Costa Rica.

The PLN has been associated with corruption ever since the current President of Costa Rica, Laura Chinchilla, accepted a flight on a private jet despite a law banning public officials from accepting large contributions.

Nationally, 870,000 people abstained from voting in the election, a figure equal to about 32% of the electorate.

Analysts predict the new runoff election could be decided in the province of Guanacaste, in the northwestern part of Costa Rica. Voter abstention in Guanacaste was well over one-third of the electorate, at 37%.

Both Solis and Araya will need to concentrate their efforts on winning over low-income voters in Guanacaste, which has a poverty rate of 34.5%.

Whoever wins the runoffs to be held on April 6, the new president will face rising unemployment and a federal debt total to half of Costa Rica’s GDP, as well as a polarized Congress and have to focus on these issues throughout his tenure.