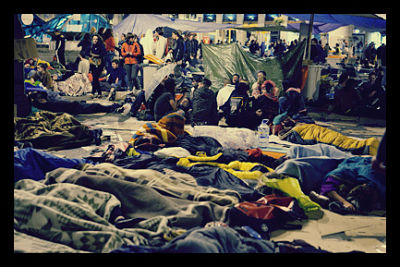 The Great Recession brought economic progress to a virtual standstill in the Western World: property values plummeted, the stock market took a hit to the gut and unemployment rates spiked. In the United States, investors and employees are slowly getting back on their feet, but are still anxious due to the ping-pongish activity of the Dow Jones and mediocre new job numbers from the Department of Labor.

While Americans struggle to digest their nation’s 6.7 percent unemployment rate, some Europeans are choking on jobless numbers affecting upwards of 20 percent of the workforce, even over five years after the economy first took a nosedive.

The European Union’s austerity measures have yet to restore stability to pre-bailout levels and a recent Oxfam report revealed “only the richest 10 percent of Europeans…have seen their wealth rise” as a result of the well-intentioned policies. Macroeconomists measure the ongoing crisis in terms of government debt, budget deficits and income inequality, but the individuals and families affected in floundering nations like Spain feel the sting of poverty in an acute and personal way.

Spain, a pillar of culture and history on the European continent, hosts millions of tourists each year who yearn for a taste of Hispanic culture and a hint of the nation’s unique flavor. Few westerners would suppose that a historic power player overflowing with natural beauty is home to a poverty rate on par with former socialist nations Romania and Bulgaria.

Spain’s saga followed the same basic trajectory as that of the United States. In 2008, following a property boom, regional governments that had raked up pricey expenses found themselves with empty pockets and out-of-control debts. A shaky central government with debt of its own was unable to provide enough federal assistance to localities and the nation found itself in an economic tailspin.

E.U. interventions such as the aforementioned austerity measures have thus far been ineffective in creating jobs and a critical portion of the Spanish workforce has emigrated in search of opportunities suited for their skill set. Those remaining must clamor for dwindling, low-paying positions.

Many former middle class Spanish families have found themselves unexpectedly living under the poverty line.

A whopping 15 percent of Spaniards subsist on less than half of the national median income and nearly 10 percent have unfortunately arrived at “great poverty” status, indicating a household income below 40 percent of the national average. For Spaniards, these rates translate into monthly earnings of below 555 euros and 444 euros, respectively, for the two groups.

Women and young people are disproportionately affected by poverty in Spain. According to Eurostat, a full 1.2 percentage points (to the detriment of females) separate the number of impoverished men and women. Similarly, six percent more young people fewer than 25 years of age suffer in poverty than Spanish citizens in their late twenties and beyond.

Rising power bills, a frozen minimum wage and more expensive public transportation will add to the burden for a generation of Spaniards who, on an aggregate level, greet 2014 “a little poorer.”

Frustrated citizens, the backbone of 2011’s “los indignados” movement (a precursor to Occupy Wall Street,) will continue to push back against policy decisions negatively impacting an increasingly impoverished working class. Poverty will be synonymous with reality for over 20 percent of Spaniards until Spain’s anemic economy is jump-started back to life.