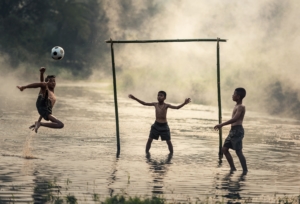 Last year, the U.K. Department of Culture, Arts and Leisure published a literature review that summarized research regarding poverty and its impact on people’s engagement with culture, arts and leisure. While it drew some fairly obvious conclusions, other findings were insightful and thought-provoking.

The first object of research was measuring how much poverty impacts people’s participation in sports. It found that adults who lived under the poverty line played fewer sports for far less time. These findings replicated those in similar studies in Canada and Australia. The lack of involvement in sports is believed to increase health risks such as obesity that are already present in lower income groups.

Some people blamed the lack of sports facilities provided in their neighborhoods. Financial and logistical barriers are a constraint. Sports equipment and transportation to and from facilities may cost extra money that the family cannot afford to spend. Moreover, parents who work more than one job find it difficult to take the time out to supervise their children, especially if their neighborhood is perceived as unsafe.

Another reason for poorer people’s reluctance to take part in sports is that they are simply not interested in them, as a study in Ireland concluded. Research in Australia demonstrated that even with ease of access to facilities and training, lower income children and adults were still less likely to play sports than their middle and upper income counterparts.

The second objective of the research was to determine how poverty impacts people’s engagement with arts, libraries and museums. Unsurprisingly, people living under the poverty line were less likely to be interested in or involved in their community’s culture. Even libraries, which are free and open to the public, see lower levels of engagement from poorer people. Children living in poverty are more likely to use the computer or TV for entertainment.

In addition to the obvious barriers of transportation costs and time constraints (for adults), poorer people frequently voiced the view that arts were for “other people and not for them.” They reported feeling out of place and uninterested. In their daily lives, art was perceived as being completely irrelevant.

To fight the main barriers to engagement in sports and culture — a dearth of facilities, extra costs and a lack of interest — the literature review recommends a few solutions: community-based solutions, personal and trusting relationships between mentors and participants, and lower costs.