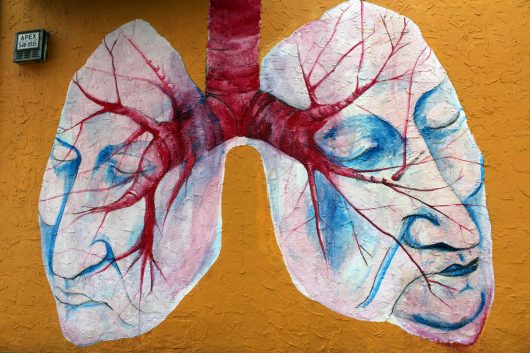 Poverty predisposes individuals to a spectrum of conditions that result from an amalgamation of lifestyle factors, health, hygiene and living conditions. Mortality from lung cancer is a more significant factor in impoverished communities compared to developed economies.

One of the major predisposing factors for high lung cancer mortality rates in developing countries is smoking. Cigarette smoke contains toxic particles which can inflict damage to cells present in the airways. Over time, these affected cells can become abnormal and lose their normal function.

The World Bank has established that smoking is more prevalent among poor groups compared to the rich, not only as a consequence of poverty but also in part due to the education individuals receive. Due to incognizance of the health risks associated with smoking, poor individuals may engage in this habit as a result of stress or poor family relationships.

Strategies to reduce lung cancer mortality in developing countries should focus on increasing access to education. Increased education can be achieved by building schooling facilities, implementing laws where education is compulsory until a certain age and subsidizing education for families who are unable to afford school fees.

A composition of diet also plays a crucial role in the development of lung cancer in impoverished countries. Some households are likely to be contingent with foods that are often processed, cheap and have poor nutritional value. As a result of low intake of fruit and vegetables, individuals are likely to be deficient in essential vitamins, minerals and antioxidants that play an important role in the body’s defense mechanisms against cancer development.

Measures to overcome poor dietary habits can include campaigns educating individuals about healthy eating. Subsidies can be offered to local supermarkets to ensure that fresh, affordable produce is readily available to individuals.

Rural communities often have poor access to health care services which can impede their ability to seek professional help at early stages. This prevents cases of lung cancer from being diagnosed and treated in the inchoate stages. Cancer can eventually progress to a serious stage where it is completely incurable and has a risk of significant mortality. Higher mortality in poor communities can also stem from a reluctance to utilize health care resources, possibly as a result of personal prejudice or concerns about a financial expense.

A recent study published by the Centers for Disease Control and Prevention states that 40 percent of identified cancer cases are associated with tobacco usage. This represents a significant proportion of cases that can be attributed to smoking, which is a preventable risk factor.

Widespread smoking cessation campaigns in both developing and developed countries can be implemented to encourage individuals to reduce smoking gradually. This can be done through advertising, counseling with health care professionals or even offering alternatives to smoking such as nicotine replacement therapy.

With greater than 36 million smokers in the United States alone, urgent action must be taken to ensure both poverty and lung cancer are reduced through a combination of corrective measures such as education, health care advice, and smoking cessation campaigns.