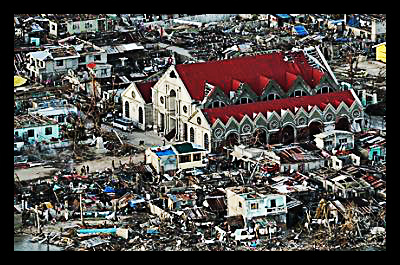 As relief efforts to victims of Typhoon Haiyan, locally known as Typhoon Yolanda, continue, Philippine legislators are currently being tried for corruption charges regarding misuse of public funds.

In reality, the pork barrel funds ended up in the coffers of five senators and 23 congresspersons. Notable among these is the alleged ringleader Janet Lim-Napoles, owner of the JLN Group of Companies. Napoles is reported to have used the funds to purchase real estate in Los Angeles.

In light of the pork barrel scandal, doubts are cast in relation to President Benigno Aquino III’s image as an enemy of corruption and it hinders efforts for further economic reform. Aquino ran on a ticket to fight corruption in 2010 – evoking his mother, Corazon Aquino’s successes against the corrupt-ridden regime of Ferdinand Marcos in the 1980s.

Aquino himself is being accused of bribing legislators’ loyalty. Around $500 million of discretionary funds for projects were dropped, an amount meant for Haiyan reconstruction.

Transparency regarding the use of governmental funds, particularly disaster relief efforts, is not a new problem. In 2009, local officials were accused of having stolen $20.7 million intended for restoring storm-ravaged northern Luzon through nongovernmental institutions.

Additionally, as stated in a report by the World Bank, addressing the links between poverty and vulnerability by the government, through proper measures and projects, could have prevented further disaster.

And yet, Malacañang emphasizes good governance and faith in relief structures. The Foreign Aid Transparency Hub (FAiTH) was established by the Department of Finance and Department of Foreign Affairs in order to better monitor and track disaster aid. The FAiTH webpage (http://www.gov.ph/faith/#) consists of a list of donor countries and organizations. The site elaborates upon the amount given and the respective organizations to which they are given. FAiTH is comprised of seven different departments within the federal government.

As the country with the largest Catholic inhabitants in Asia, faith gives hope amidst the death toll of over 5,000 with many more displaced. Faith in the idea of good government, however, is, literally, standing trial.

Sources: The Republic of the Philippines, The Independent, Huffingtion Post, Reuters, NBC