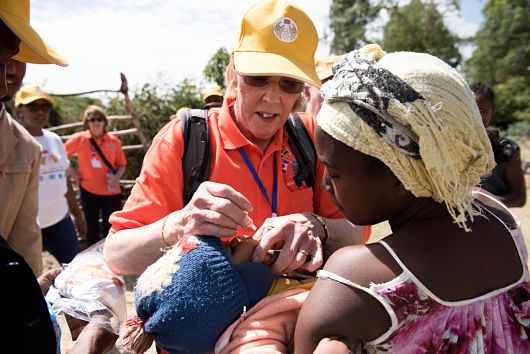 The World Health Organization confirmed that polio in Ethiopia has been eradicated after an assessment team concluded the evaluation process from June 8 to June 12, 2015. This last polio outbreak began almost two years ago in the Horn of Africa, specifically in Ethiopia, Kenya and Somalia.

The assessment team worked together throughout the outbreak in all three countries to determine that global standards had been met in response to the outbreak and that the transmission of polio had been interrupted. To do this, the team monitored updates from the Federal Ministry of Health on such matters as immunization progress and activities, funding aspects, communication and surveillance.

The assessment also provided a framework for the efforts still needed to maintain a polio-free status. In order to remain polio-free, Ethiopia needs to update its outbreak and preparedness response plan, strengthen routine immunization and fortify their implementation of acute flaccid paralysis (AFP) surveillance.

AFP is the symptom that indicates that polio could be present. It means that limbs are floppy and lifeless. However, its presence could also be due to other causes. As a result, AFP must be reported in every child less than 15 years of age and tested for poliovirus within 48 hours of onset.

It is expected that there are one to two cases of AFP in every 100,000 children under the age of 5. If there are no reports of AFP in such circumstances, then a region is considered to be “silent.” “Silence” indicates a weakness in the surveillance system, and a failure to end this “silence” could prevent the eradication of polio.

According to WHO, “As long as a single child remains infected […] as many as 200,000 new cases could result every year within 10 years, all over the world.”

Polio is caused by a highly infectious virus, poliovirus, which invades the nervous system. However, 90% of infected people have no symptoms or just very mild symptoms that go unnoticed. In other cases, symptoms could consist of fever, fatigue, headache, vomiting, stiffness in the neck and pain in the limbs. One in 200 infected people become irreversibly paralyzed, usually in the legs. Five to ten percent of those paralyzed die because their breathing muscles become paralyzed.

Across the Horn of Africa, 223 children became paralyzed during the last two years, due to the poliovirus.

Since there is no cure for polio, the polio vaccination is the only protection. In Ethiopia, social mobilizers were successful in their efforts to raise parents’ awareness of the risks of polio and upcoming campaigns to vaccinate children.

It is these connections among informed social mobilizers, healthcare workers and parents within a community that not only leads to vaccination but also builds understanding and commitment to recognizing and reporting AFP to authorities.

Although vaccination and AFP are critical in the eradication of polio, this is not accepted knowledge everywhere. Taliban militants strongly resist vaccination campaigns and are considered responsible for deadly attacks on polio vaccination workers. They “view the campaign as un-Islamic and the health workers are Western spies,” according to The New York Times. Pakistan accounted for 85% of the polio cases reported in 2014.

In spite of these hurdles, the Global Polio Eradication Initiative, launched in 1988 by the World Health Assembly to eradicate polio worldwide, has made enormous progress. Since that time, the number of people infected with the poliovirus has dropped more than 99%. In 2014, only 3 countries remain polio-endemic: Afghanistan, Pakistan and Nigeria.

Cooperatives are the Future for UN’s Success6 Cosmetic, Clothing or Accessory Brands Working for Good Causes
Scroll to top