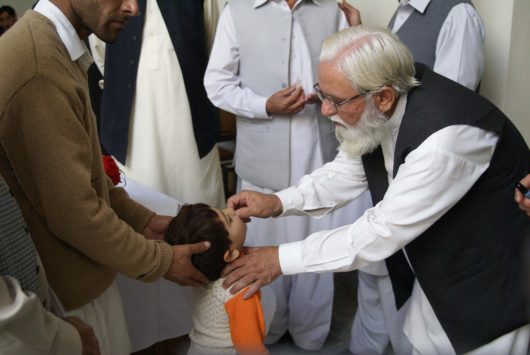 With the support of public and private institutions such as WHO, Rotary International, the U.S. Center for Disease Control and Prevention (CDC), UNICEF and the Bill and Melinda Gates Foundation, polio case numbers have decreased by 99 percent since 1988.

Moreover, 80 percent of the world’s population is now living in certified polio-free regions. There are just three countries that have been unable to stop the spread within their communities: Afghanistan, Nigeria and Pakistan.

In these countries, progress had been slowed due to weak health infrastructures as well as ongoing political conflicts and security concerns.

Just last year as Nigeria had been declared free of polio, new cases appeared in Borno state. This area had been inaccessible due to the control of the militant group Boko Haram; thus, medical professionals were unable to provide the vaccinations and preventative measures needed to stop the virus from circulating.

Despite these setbacks, complete and successful polio eradication in all countries is still expected by 2020. According to Bill Gates, fulfilling this timeline would require the last case of polio to be recorded in 2017, where a three-year period will ensure that the virus has completely disappeared.

Polio, which has not been a huge health crisis in the majority of countries, has existed in low-income countries where it has affected mainly children under the age of five. One in 200 infections lead to irreversible paralysis. However, preventative measures are easy.

Although there are two forms of the vaccine, oral polio vaccine (OPV) and inactivated polio vaccine (IPV), just one dose of OPV costs as little as 14 cents.

Last week, with the help of Gates, billionaire philanthropists such as former New York City Mayor Michael Bloomberg and Ray Dalio, chairman and co-chief investment officer of Bridgewater Associates LP, collectively donated more than $70 million toward the Global Polio Eradication Initiative. These costs have brought the efforts a step closer to the $7 billion required to fund these low-cost vaccines and overall eradication efforts.

Dalio, through a representative, said, “Just from an investment perspective, eradication makes sense. It will eliminate the future financial burden, and unlock doors to economic productivity around the world.”

With a proven track record of eliminating polio in various countries and with the additions of donated funds to this global initiative for polio eradication, WHO and participating institutions can achieve the goal of polio eradication by 2020.