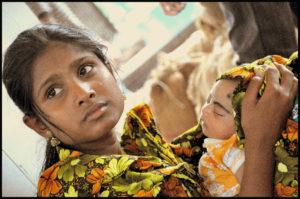 Twelve million girls a year—or 23 girls every minute—are married before their 18th birthday. The most common factors that contribute to child marriage are poverty, lack of education and gender norms. Around the world, 21% of young women were married as minors. The prevalence of child marriage is even higher in sub-Saharan Africa, at 37% of young women. Various art forms, including photography and music, have been used to advocate for the eradication of this harmful practice. Photography fights child marriage by raising awareness for this pressing issue and empowering women to take action.

When young women and girls are forced to marry, they are less likely to attend school. They are separated from their family and friends, and they are also more likely to experience life-threatening complications during pregnancy and childbirth, suffer domestic violence and contract HIV/AIDS. Furthermore, child marriage traps these girls in a cycle of poverty, in which they and their children are less able to access opportunities for education and economic empowerment.

Too Young to Wed, a nonprofit founded in 2012 by photojournalist Stephanie Sinclair, uses photography to raise awareness of the prevalence of child marriage. This organization creates media campaigns focusing on child marriage and uses compelling photojournalism to show that the practice is a violation of human rights. The photographs have been seen by billions, and one media campaign that focused on child marriage in Nepal reached more than 9.7 million people. The photographs, alongside firsthand accounts from girls at risk of or impacted by child marriage, “inspire the global advocacy and policy-making communicates to act,” according to Sinclair.

In addition to organizing photo workshops, this organization provides leadership scholarships, vocational training and other support. The Leadership Scholarship program is especially crucial because education is vital to preventing child marriages. In the last eight years, Too Young to Wed has directly helped 600 girls, and much more indirectly, in its fight against child marriage. Sinclair told Global Citizen, “[Girls] can do all kinds of things that they can bring back to their community and then also bring them out of a level of poverty where the most extreme forms of child marriage are definitely happening.” When young women are educated, their children are more likely to be educated as well, which helps take the family out of the cycle of poverty.  Overall, Too Young to Wed uses visual evidence and storytelling to highlight the harmful impacts of child marriage, empower girls and inspire change.

Since 2016, Too Young to Wed has provided a week-long photography workshop that also functions as an immersive art therapy retreat called the Tehani Photo Workshop. Partnered with the Samburu Girls Foundation, Too Young to Wed held the first workshop in Kenya, where about 1 in 4 girls are married before the age of 18. During this workshop, 10 girls who had escaped their marriages learned how to shoot portraits, and they were able to form friendships and reclaim their narratives. To conclude the workshop, the girls presented their photographs and told their stories to more than 100 members of their community.  According to Sinclair, the workshops aim to “help [the girls] better realize their self-worth and the value of their voice.”

Music as a Tool in the Fight Against Child Marriage

In Benin, where more than 25% of girls are married before they are 18 years old, artists collaborated in 2017 to release a song and music video that highlighted this issue. UNICEF’s Goodwill Ambassadors Angélique Kidjo and Zeynab Abib, along with seven other artists, composed the song as part of the national Zero Tolerance Campaign against child marriage. The song is titled “Say No to Child Marriage” and includes multiple languages so its message resonates with people within Benin and in neighboring countries. “Child marriage is a negation of children’s right to grow up free,” said Kidjo. “Every child has the right to a childhood.”

In 2019, the United Nations Children’s Fund worked with music producer Moon Boots and vocalist Black Gatsby to produce a music video to speak out against child marriage in Niger, where 76% of girls are married before the age of 18. Also, according to UNICEF, Niger has the world’s highest rate of child marriage. The song, titled “Power,” promotes education as a positive alternative that can empower girls and reduce poverty in their communities. According to a Félicité Tchibindat, a UNICEF representative in Niger, it also fights against the practice of child marriage by raising awareness that “ending child marriage is possible,” even though it is a long-held social norm.

Although the rates of child marriage are gradually declining worldwide, it is estimated that 120 million more girls under the age of 18 will be married by 2030 if current trends continue. The coronavirus pandemic has also put up to 13 million more girls at risk of child marriage because of rising poverty rates, school closures and hindered access to reproductive health services and resources.

Twenty-five million child marriages have been prevented in the last ten years, and UNICEF attributes the decline of the practice in part to “strong public messaging around the illegality of child marriage and the harm it causes.” While photography fights child marriage, further far-reaching and powerful art initiatives, along with the work of national governments and international organizations, can continue to raise awareness, empower girls and reduce the prevalence of this practice around the world.