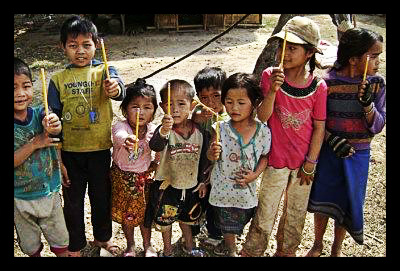 Pencils of Promise’s programs have impacted more than 300,000 lives. Its schools have served more than 31,240 students and its scholarship recipients are two times more likely to progress to secondary school than the regional average.

Founder Adam Braun was a college student backpacking across the globe when he asked a small boy begging on the streets of India what he wanted most in the world—the answer? A pencil. Braun reached in his backpack and handed him his pencil as ‘a wave of possibility washed over him.’ Over the next five years, Braun backpacked through more than 50 countries handing out thousands of pens and pencils across six continents.

These pencils led to powerful conversations with local parents and children across numerous cultures and languages. In October 2008, PoP was founded. What began with a mere $25 deposit has now built more than 200 schools, breaking ground on a new school every 90 hours.

“We’ve learned that education is a living, breathing entity that with the right nurturing, evolves into something spectacular,” Braun writes on the website.

“We’ve learned that every piece of its growth is a challenge and that each pencil, each dollar, each supporter is essential. Pencils of Promise is now a global movement of passionate individuals, many of which are the most dynamic and impactful leaders we have ever seen. They are committed to supporting a world with greater educational opportunity for all. Thousands have joined us, making contributions through acts both large and small.”

There are three main things that set PoP apart from other organizations. PoP is 100 percent for-purpose, 100 percent direct giving and has a 100 percent success rate. It is a unique organization  because it blends the head of a for-profit business with the heart of a humanitarian nonprofit— by covering operational costs through private donors, events and companies, 100 percent of every dollar donated online goes directly into its programs to educate more children. Furthermore, it does not just “build a school and move on.” PoP monitors and evaluates every project it undertakes— ensuring that every school it opens is fully operational and educating students daily.

On its website, one can donate various amounts of money, each detailing exactly how much of an impact it would make— $100 to keep children healthy, $250 to educate a child, $500 to train a teacher and $25,000 to build a school.

PoP can also be credited with being extraordinarily innovative. PoP works to provide schools with smartphones, e-readers, long-range radio and creative materials in order to reach the most under-served communities in the countries where PoP works. One e-reader provides a student with 50 books in both English and the local language. Smartphones deliver interactive audio lessons to provide expanded access to learning and a mobile learning kit contains books, phonic games and creative educational tools for teachers.

This  organization not only trains teachers, but also teaches and trains students about WASH (water, sanitation and hygiene). Students miss 272 million school days due to preventable illness and the international WASH program has allowed PoP to train more than 5,040 students since 2009. Pop does this via a three-step approach: building bathrooms and hand washing stations, teaching students and tracking behavior change.

The Huffington Post reported that the program has brought hope to children around the world in the form of 10 million hours of education as of March 2014.

Correlation Between Gender and PovertyPoverty in Indonesia
Scroll to top