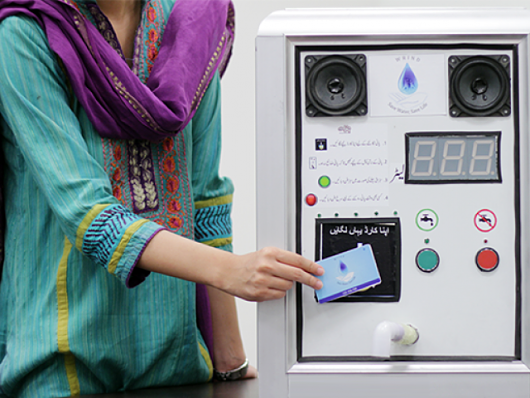 The small, two-foot boxes function just like normal ATMs, with one notable difference. Instead of cash, the machines dispense clean drinking water, which in times of extreme water scarcity can be more valuable than money.

Punjab Saaf Pani (Clean Water) Company and the research center Innovations for Poverty Alleviation Lab (IPAL) created the drinking water ATMs to give residents in “rural and urban fringe areas” access to clean water. The ATMs provide water free of charge to beneficiary families, and communities will be responsible for pooling funds for the machinery’s maintenance charges.

To operate the machines, users scan a smart card to verify their identities, then push the machine’s red and green buttons to collect their daily share of water. The system will allow each family to collect up to 30 liters of water a day.

The project also aims to help the Pakistani government reduce water waste. To help the government track the exact amount of water dispensed in each location, a central server for the machines will virtually record water use in real-time.

Currently, Pakistan has few water conservation programs in place. One official noted, “There is a national habit of extravagance,” regarding resources like water, electricity and gas. The drinking water ATM system will help the government regulate the population’s consumption of water for home and agricultural use.

Because agriculture alone makes up 21 percent of Pakistan’s GDP, proper water management is key to the growth of the country’s economy. The Indus River stretches the length of Pakistan and feeds irrigation canals nationwide. Water shortages due to drought and mismanagement can affect major exports such as vegetables, wheat and cotton.

The Indus Basin aquifer, which provides fresh water to Pakistan and India, also faces a shortage crisis. There are few alternatives to excessive aquifer use in the densely populated region, and the underground water table is being depleted faster than it can recharge. As a result, the Indus Basin is now the second most stressed aquifer in the world.

To address this worsening water crisis, Punjab Saaf Pani Company and IPAL plan to install 20 initial ATMs at water filtration centers in Punjab, Pakistan’s most populous province. The project will start in three Punjabi districts with serious water contamination issues. According to the program manager at IPAL, this first round of installations will benefit over 17,500 families.

The Punjabi government has pledged the equivalent of almost $200 million to clean water efforts through 2017. It plans to expand its current programs to provide 35 million people with access to safe drinking water.

In February, Pakistan’s minister for water and energy warned that both climate change and government waste have taken a toll on the country’s water supply. “Under the present situation, in the next six to seven years, Pakistan can be a water-starved country,” he stated.

Nationwide, 35 percent of Pakistan’s population lacks access to clean drinking water. In rural areas of Punjab province, that number is as low as 13 percent.

The recent heatwave in Pakistan brought international attention to the government’s mismanagement of the water crisis. Over 1,200 people have died as a result of dehydration, heat stroke and other heat-related causes, though the government has denied accountability for the deaths.

Many experts consider ineffective governance at the national level the biggest obstacle to water security in Pakistan. Muhammad Farasat Iqbal, chief executive officer of Punjab Saaf Pani Company, says that while access to clean water has become a top priority of the provincial government, it will take the concerted effort of the national government to effect real change across Pakistan.