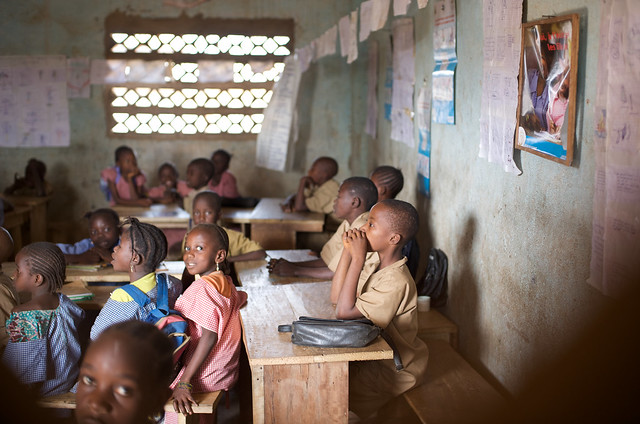 Sierra Leone is a country with an abundant amount of natural resources located on the West Coast of Africa. From 1991 to 2002, Sierra Leone endured a civil war that had detrimental effects on the country’s physical, social and economic infrastructure. After the civil war, Sierra Leone made significant progress in almost all sectors. Unfortunately, its education sector is still facing challenges. Organizations such as SOS Children’s’ Villages International and Schools for Salone, with the support of the Government of Sierra Leone, have stepped in to help better Sierra Leone’s education sector.

Since the civil war, Sierra Leone has made great efforts in rebuilding destroyed, abandoned and damaged schools, but most schools are still in need of repairs. Furthermore, many schools lack sufficient learning materials or qualified teachers. However, Sierra Leone has seen an impressive percentage increase in primary school enrollment. Nearly 100 percent of both boys and girls attend primary school. There is only a 2 percent difference between boys and girls completing their education, boys at 69 percent, and girls at 67.

Since 60 percent of people in Sierra Leone live under the poverty line, it makes it difficult for many households to afford school for their children. It was reported, in the 2015 Comprehensive Food Security and Vulnerability Analysis, that 35 percent of households don’t enroll their children in school due to lack of funds and about 28 percent don’t have a functioning school in their village or community. Building more schools for Sierra Leone, especially in rural areas, is important and vital for the future of the people and the country.

SOS Children’s Villages provides various programs to make sure that children have access to quality education and training to prepare them to become independent adults. Some of the things the programs have created and supported are improving child-centered quality education, creating inclusive learning environments, working with communities and authorities to build schools as well as providing speech therapy and after-school tutoring, mentoring and coaching for the youth. SOS Children’s Villages also runs the schools that it has established and built in order to ensure quality education. About 3,000 students have benefited from the organizations’ schools and programs in Sierra Leone.

In 2005, Schools for Salone began its mission to provide quality education to the people of Sierra Leone. Since 2005, the organization has built 22 primary school buildings and three school libraries. These facilities serve more than 6,500 children across Sierra Leone. Schools for Salone has also provided training opportunities for more than 150 teachers. Its main missions are to build schools, keep boys and girls in school and provide scholarship opportunities for the children of Sierra Leone.