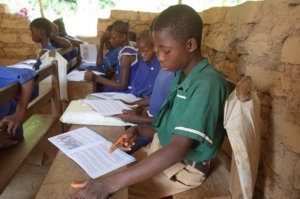 Education in Sierra Leone has been a challenge. The devastating Sierra Leone Civil War that lasted from 1991 to 2002 took the nation’s education system as an early casualty, wiping out 1,270 primary schools and forcing 67 percent of all-school aged children out of school in the year 2001. More than a decade later, education in Sierra Leone is still recovering from the destruction caused by the conflict. The first nine years of education are compulsory, but this law remains virtually impossible to enforce due to the shortage of facilities left in the war’s wake. The West African nation continues to struggle with its school system and the difficult tasks of rebuilding schools, training teachers, and educating children who have never stepped foot inside of a classroom.

The system of education in Sierra Leone comprises three basic levels: primary, junior secondary and senior secondary. All six years of primary education are free of cost. Students begin junior secondary school around the age of 12 and remain at that level through age 15. Girls living in rural areas typically have the toughest time reaching this level of schooling due to cultural beliefs that often discourage their participation. Students enroll in senior secondary schools from the ages of 15 to 18, and it is at this level that they may choose to between continuing their academic education with plans of proceeding to university or focusing on vocational training. Most vocational education programs focus on agricultural skills, followed by other proficiencies like mechanics, carpentry and bricklaying. Students wishing to pursue a university degree in Sierra Leone have two options to choose from: Njala University and the University of Sierra Leone.

Despite these opportunities, education in Sierra Leone continues to face significant hurdles. More than 40 percent of primary school teachers are untrained. There is also a massive shortage of textbooks, and it is not uncommon for four or five students to share a single book. The literacy rate among 15 to 24-year-olds is below 60 percent, and the total adult literacy rate is even lower, at about 43 percent. Secondary school participation is low, with a net attendance ratio from 2008 to 2012 of 39.9 percent for boys and 33.2 percent for girls.

The Good News about Education in Sierra Leone

However, this is not to say that Sierra Leone has failed to improve from the initial damage left by the war. Education in Sierra Leone has experienced notable advances in recent years. Just after the conflict, a mere 55 percent of children were finishing primary school. That number has since jumped to 76 percent of students finishing primary school, and 77 percent of those children advancing to the junior secondary level. The youth literacy rate jumped a full percentage point from 2009 to 2010. The government of Sierra Leone spends 14 percent of its national budget on education and half of that figure is devoted to primary education.

With generous funding from the government of the Netherlands, teacher-training programs have been greatly improved in recent years with more than 3,000 teachers now enrolled in first-time or continuing courses. UNICEF’s Cross Border Schools Project, which trains teachers and school managers, is in the process of curtailing the high numbers of out-of-school children throughout the nation’s border regions.

An especially serious problem that continues to plague education in Sierra Leone is the challenge of girls’ education. Although girls’ educational access is improving, class completion remains scarce with high dropout rates and consistently low enrollment in secondary school. Early pregnancy, gender-based violence, child marriage and cultural biases propagate the cycle of gender inequality. Sierra Leone has one of the world’s highest adolescent pregnancy rates, a phenomenon that is largely responsible for the high dropout rate among girls. Girls in Sierra Leone often get married as early as age 11, and more than 60 percent of girls throughout the country are married before the age of 18. Early marriage further hinders these girls’ abilities to pursue an education and gain independence. Shortages of facilities, supplies, and quality instructors have made it virtually impossible for all children to enroll in school, and a preference for boys’ education remains dominant. Girls are often instructed to stay home and perform domestic responsibilities while their brothers head to the classroom.

While education in Sierra Leone still has a long way to go, the progress made so far has been encouraging.

Learn about poverty in Sierra Leone.