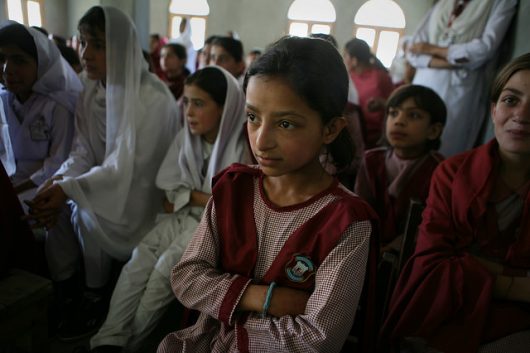 In Pakistan, about 58 percent of the population is illiterate and 11-12 million children are working instead of attending school. But thankfully, a firefighter in Islamabad is working to help change these major societal problems in Pakistan.

For the past 30 years, Mohammed Ayub, affectionately known as “Master Ayub,” has held classes in a park near Pakistan’s parliament to educate poor children who cannot afford an education.

At this “open air” school in Pakistan, the children are taught a 1st to 10th grade curriculum, and are even taught how to speak English.

Ayub felt compelled to start teaching poor children after he moved from the agricultural town of Mandi Bahauddin, to Islamabad, Pakistan’s capital. In the city of Islamabad he saw small children in the streets doing various types of work such as cleaning cars, selling trinkets or begging.

One day after work, he approached one of these working children and told him that he would give him an education completely for free. The child accepted his preposition, and as word spread of his open air school in Pakistan, many more children began to enroll. Now, as soon as his work finishes at 3 pm, he goes to the park to teach about 200 students with the help of former students and friends.

Ayub himself pays for all of the students’ books, pencils and food.

Ayub believes education is extremely important for poor children because these citizens are especially vulnerable to developing into criminals and terrorists. In an interview with VPRO Metropolis, Ayub said “poor people; they need help. They start thinking negatively. They become thieves or plot bombings. That’s why I want to help them, so that they have an aim in life. They are our future teachers and doctors.”

His students are very ambitious and dream of becoming doctors and scientists. Before exams, they all gather in the park at night to study; when it gets chilly, they bundle up and study harder.

Ayub’s former students have gone on to attend university and secure well-paying jobs, and in the future, Ayub dreams of building a school for his students, especially because he hopes to incorporate computers in his teaching. In an interview with Al Jazeera he says that he wants to leave a facility behind after his death “where these children continue to get the light of education.”