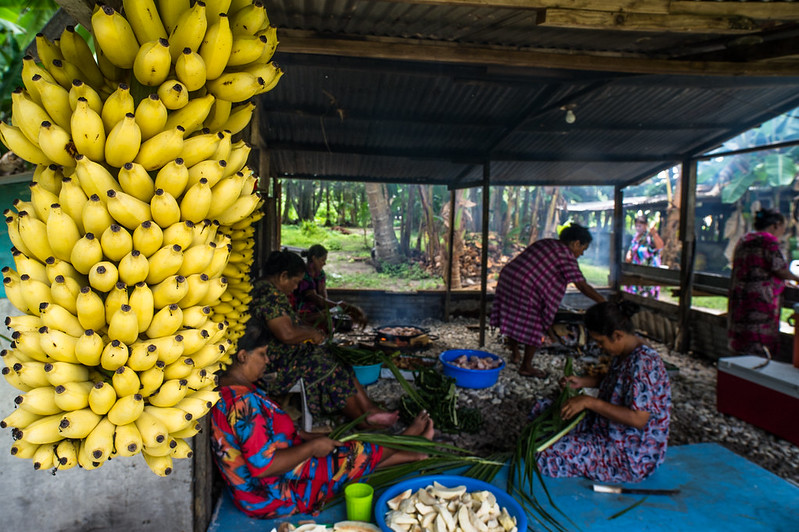 The Marshall Islands lie in the Central Pacific near halfway between U.S. Hawaii and the Philippines. The islands consist of 29 sprawling coral atoll-based and volcanic islands. With a population of only 60,000 people, the islands barely amount to a mere American town. Despite its military presence, the U.S. does not ‘own’ the islands.

The Marshall Islands are tactically important but small and very much underdeveloped, supporting happy, simple lives for many of its occupants. However, today, poor and unhealthy shanty towns are sadly commonplace. The rate of poverty in the Marshall Islands in 2019 was 7.2%.

A plan to develop or rejuvenate the Islands, and particularly heath care, rests on the shoulders of the U.S. The man-made calamity of nuclear radiation in the Marshall Islands is a stark warning to all humankind, of the dangers of nuclear mass destruction in the Pacific proving ground experiment.

During the second world war, the U.S. wrestled the islands away from the Japanese Empire. This was no relief for the inhabitants as “between 1946 and 1958 the U.S. nuclear testing program drenched the Marshall Islands with firepower equaling the energy yield of seven thousand Hiroshima bombs.”

The United States detonated a total of 67 nuclear bombs, some up to seven times more powerful than Little Boy, in the Marshall Islands. Nerje Joseph witnessed the Castle Bravo explosion from the neighboring atoll of Rongelap, an experience that will forever haunt her. Joseph evacuated the island as her hair began to fall out. Almost all those that dwelled on Rongelap that fateful day now have cancer. The locals of Bikini attempted to resettle the atoll in 1969, and nine years later, they evacuated again because the radiation was still too high.

In 2010, the National Cancer Institute “suggested that up to 55% of all cancers in the northern atolls are a result of nuclear fallout.” Thyroid cancers are particularly common. Sea life in the Marshall Islands became poisoned, resulting in the need to import processed food, which has in turn led to spiraling diabetes cases.

At the present time, the U.S. has denied calls for compensation on any series level. The United States previously attempted to clean the area up by housing contaminated soil and debris in a concrete tomb known as the Tomb. However, to this day, the contents are leaking out. The Tomb includes domed-in content of 100,000 cubic yards of nuclear waste, some of which comes from as far as the U.S. Nevada testing site. Unfortunately, Washington is now washing its hands clean of the maintenance expense, quite unfairly stating that since the dome is on Marshallese lands, the Marshall Islands, which only has a population of a single American town, ought to pay for it. The Tomb is continuing to leak and become ever more unstable, putting the poor standards of health on the islands at further risk.

Fortunately for the Marshallese, the U.S. commits to protecting these islands, Bucholz Army Airfield is the military base there. This base actually has missile testing rights potentially until 2086. Regardless, this base at the very least keeps the island safe from external aggressors. As China grows in power, it for one has set its sights on the islands of the pacific. This has more benefits for the Marshallese than one might think.

The U.S. has acted independently to aid the Marshallese in preparation for extreme weather resilience. The Pacific Partnership 2019 was a U.S. commitment to help the Marshall Islands’ readiness for extreme weather disasters, via seminars and preparation. Additionally, this program includes the installation of rainwater-catching infrastructures, such as the one set up at the Long Island elementary school. This reduces the devastating impact of extreme weather, such as drought. The installation presents clear steps to ensure the viability of the military base, yet benefit the locals greatly, for the islands are ever in danger from extreme weather events. Protection against such events is protection against the poverty they inevitably cause.

Since 2004, the U.S. has gifted $800 million to the islands, equivalent to 70% of the island’s GDP in that same period. The highest employer on the Islands is the Marshallese Government, followed by the mighty U.S army base. In addition to the local government’s budget, the U.S. has allowed for the setting up of two hospitals and 60 medical clinics. Additionally, the U.S. directly pays for the healthcare of the four atolls that the nuclear radiation has most severely affected.

However, for advanced care arising from nuclear radiation, such as late cancer treatment, islanders have to travel to the Philippines as the facilities are lacking in the Marshall Islands. Healthcare improvements are a great opportunity for moral correction, one that is desperately necessary, even outside the realms of radiation poisoning. For example, despite a reduction of 20% in the past 40 years, the child mortality rate is still high at 30.7 per 1,000.

The country’s GDP has more than doubled in the past 20 years. About 0.9% of the Islanders live in absolute poverty as of 2019 or about the same level as Spain, a developed European nation. Development, reducing health poverty and righting wrongs are very much achievable and it feels with the right push, hope for the Marshallese could be just around the corner. The difficulties that arose from nuclear radiation in the Marshall Islands can become a thing of the past and the Marshallese can work on developing their sublime islands without this plague if those proven wrongs are put right.