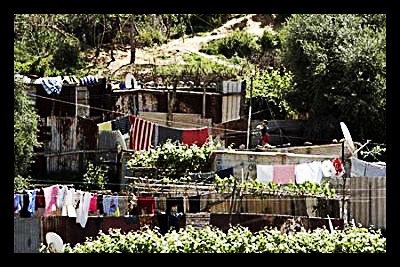 Rural poverty in North Africa is similar to rural poverty in South Africa, though the national poverty line varies dramatically. According to Rural Poverty Portal, this includes the differences between 6% in Tunisia and 90% in Somalia. North-African economies are in dire straits.

Poverty-ridden people, they said, “constitute about one third of Tunisia’s poor population, and about three fourths of Somalia’s poor.” However, poverty in Northern Africa is still concentrated in rural areas.

This has deep causes such as the limited availability of “good arable land and water,” and “the impact of droughts and floods.” Conflict has similarly disrupted agriculture and thus intensified poverty, especially in Somalia and Sudan.

Algeria is a country in Northern Africa whose economy is dominated by the state, according to the CIA World Factbook.

“Hydrocarbons have long been the backbone of the economy,” the Factbook explains, “Accounting for roughly 60 percent of budget revenues, 30 percent of GDP (gross domestic product) and over 95 percent of export earnings.”

Despite Algeria’s relative stability, things such as transportation and a stable social infrastructure remain obstacles for Northern Africa. High rates of illiteracy, especially among women, also negatively affect the economy.

Rural Poverty Portal furthermore illustrated that the northern region of the continent has “weak local institutions, poor integration with the national economy, and the migration of rural youth to urban areas.”

However, the urban areas in Northern Africa hold the most political influence. “Government policies and investments in the region tend to favor urban areas over rural areas,” they said.

Just south of Algeria lies Niger, a land-locked, Sub-Saharan nation. Though it shares a border with Algeria, a relatively stable African country, it has a very low income – less than $250 USD gross national income per capita, according to the World Bank Development Indicators as of 2005.

The Factbook said that food security remains a problem in Niger, and is enhanced by refugees from Mali.

Sixty-three percent of the population lives below the poverty line, according to the most recent data which was gathered in 1993.

Northern Africa has a wide disparity between the very poor and the middle-class. Though some countries are more stable than others, education, food stability, access to clean water and social stability remain significant obstacles for the reduction of African poverty as a whole.