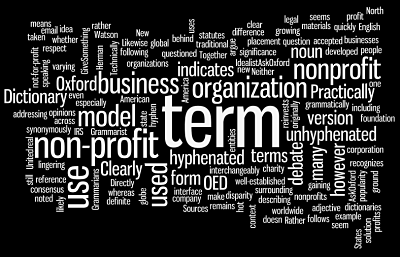 The not-for-profit business model is gaining ground worldwide, especially in the context of charity. So too is the debate surrounding the term non-profit. Mainly, is it non-profit or nonprofit? Clearly, the debate is a hot one, as there are varying opinions even in well-established dictionaries; whereas the Oxford English Dictionary uses the hyphenated version, the New Oxford Dictionary of North America recognizes the unhyphenated. Likewise, legal materials and entities in the United States seem to use the terms synonymously, including state corporation statutes and the IRS.

Clearly, there is no global consensus. That said, the question remains whether there is some lingering significance in the disparity. Practically speaking, the many organizations and businesses that use the term do so interchangeably, which indicates there is no real difference. Directly questioned, the people at AskOxford, an email interface for addressing the OED, noted the use of the hyphen in the OED as a traditional respect for the term as originally developed, while the “new” American version has more quickly accepted the term as nonprofit.

Technically, however, there seems to be a rather clear and definite solution. Grammarians would likely argue that use of the term in it’s hyphenated form indicates its placement as an adjective, describing a following noun. For example, the non-profit business model is growing in its popularity. In its unhyphenated form, the term is used as a noun. Together, they could be used as follows: the non-profit business model is used as a foundation for many of the nonprofits across the globe.

Practically or grammatically, the terms are still taken in reference to the same idea. Neither term, however, means that the organization behind the term doesn’t make a profit. Rather, a non-profit organization, or a nonprofit, reinvests its profits in the organization or company.