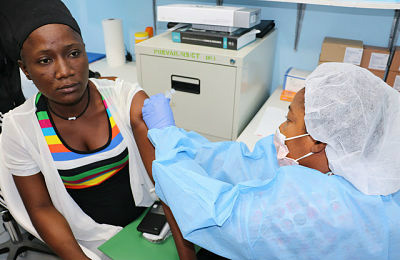 On Monday, May 29 the government of the Democratic Republic of the Congo approved the use of a new Ebola vaccine to address the current outbreak in the northeastern region of the country. According to Reuters, a Medecins Sans Frontieres (Doctors Without Borders) team arrived the same day to validate the protocol with technical teams. Since the beginning of the outbreak in April, the Congo has seen around 19 cases of the Ebola virus, including suspected and probable cases. There have been four deaths reported since the beginning of the outbreak.

The vaccine, rVSV-ZEBOV, has been in development since the 1990s. NPR notes that in the 2000s the Ebola vaccine was not produced due to a lack of funding. It was first tested in Guinea in 2015 in collaboration with the World Health Organization (WHO), Guinea’s Ministry of Health, Medecins Sans Frontieres and the Norwegian Institute of Public Health. In the trial, the vaccine completely protected all 5,837 people it was administered to, with some participants feeling side effects of the vaccine. According to the WHO, “no Ebola cases were recorded 10 or more days after vaccination.” The efficacy of the Ebola vaccine is approximately 70 to 100 percent, although this will likely decrease as more people are vaccinated.

Despite the trial conducted by WHO, the vaccine has not yet been approved by the WHO or the Federal Drug Administration. According to NPR, this approval will likely happen in 2018. Development of the vaccine was largely made possible by funding from the WHO and the Global Alliance for Vaccines and Immunization (GAVI). GAVI provided $5 million in funding to allow for the production of the vaccine by the pharmaceutical company Merck. There are currently 300,000 doses available. Merck will submit the Ebola vaccine for approval by the WHO by the end of 2017.

The efficacy of the Ebola vaccine is so high that it will likely be effective at halting the outbreak in the Congo, thanks to the combined efforts of multiple parties like GAVI and the WHO. The development of rVSV-ZEBOV is a much-needed game-changer in the continued battle against the Ebola virus.

Cash-Based Transfers: Food Assistance That Empowers Global Aid and the 10 Poorest Countries in the World
Scroll to top