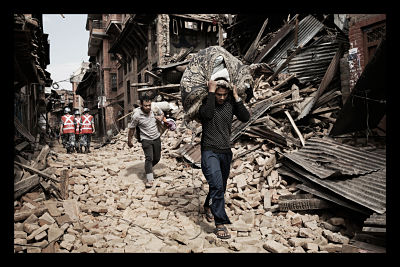 The 7.8-magnitude earthquake that rocked Nepal, turning buildings into ruins and killing nearly 5,900, has serious monetary implications. With the cost of reconstruction standing at $5 billion, it is evident the economic aftershocks will continue to be felt for years to come.

Frantic rescue workers, faces caked with ash and dust, carried a victim on a stretcher following the collapse of Dharara tower in Kathmandu, Nepal. Omar Havana, a freelance photographer for Getty Images, watched from afar.

“I try to be as human as I can be,” Havana said. “It’s hard not to be overwhelmed [by] what’s in front of my eyes: a hand appearing from the debris, a mother hold[ing] her baby. I’m just trying to tell the story of the people and the damage caused to the city.”

Centuries-old temples and palace squares, once meccas for travelers, have been turned into dust. Tourism, which accounts for eight percent of Nepal’s economy, is likely to nosedive as high-end hikers and backpackers cancel vacations.

The seven percent of the workforce involved in the tourism sector will also feel these aftershocks, left unemployed and homeless in one of Asia’s poorest countries.

“Imagine the Due Torri in Bologna or the Washington Monument in Washington, D.C. crumbling into rubble,” Saurav Rana, World Bank Group consultant, said of the destruction. “The loss has been demoralizing.”

Critical foreign investment plans are also being halted. A Chinese funded hydroelectric dam near the Himalayas, a $1.6 billion project, has been placed on the back burner.

Coca-Cola Company bottling plants in Kathmandu and Bharatpur have been temporarily shutdown. Stalling output will only worsen the unemployment rate, which currently stands at 40 percent.

“It has been one of the worst scenes I’ve witnessed in my life,” Havana said.

For those in Nepal’s capital of Kathmandu, rampant power outages and constant rain have left camps of families unnerved and dejected. Rural areas, where nearly 80 percent of Nepalis live, remain buried under landslides, inaccessible to rescue workers.

With the wet monsoon season a month away, many fear abject conditions and destroyed infrastructure will only foment an increased number of dysentery, cholera and hepatitis cases. Crowded camps, limited supplies and scarce drinking water will also put a strain on health care centers.

So far, the Asian Development Bank, a regional multilateral lender, has pledged $200 million to fund the first phase of rehabilitation. U.S. Secretary of State John Kerry also announced that the U.S. has pledged $10 million.

Though this aid could have a sizable impact on the small country, analysts are doubting the government’s capacity to revive Nepal’s economy. Political discord could compromise rehabilitation.

“It’s not only money that you need for reconstruction, but also human knowledge and a functioning government,” said Ilan Noy, an expert on the economics of disasters at Victoria University of Wellington in New Zealand. “Nepal belongs to a category of countries where it’s unclear whether the ability to execute reconstruction will be sufficient.”