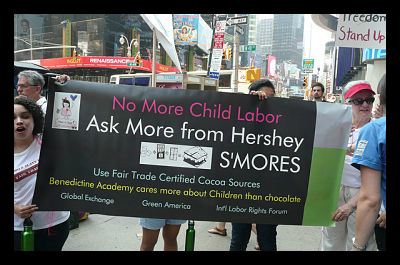 Over 35 percent of the global population is living on less than $2 a day. This makes 2.5 billion people worldwide vulnerable to becoming trafficking victims.

There are an estimated 14.2 million people who are trapped in what is considered forced labor. Common industries for forced labor include agriculture, domestic work, construction and manufacturing. An estimated $9 billion is annually generated from forced labor activity in agriculture and forestry work alone. Additionally, an estimated $34 billion has been made in industries such as construction, mining and manufacturing. According to the State Department, the average labor trafficker makes $4,000 per victim annually.

Anyone can become a victim of labor trafficking, no matter his or her gender, age or ethnicity. There are victims in every country, including the United States. Those targeted in the U.S. tend to be vulnerable populations, most commonly recruited from homeless shelters. Unskilled labor, a lack of educational opportunities and high rates of illiteracy are common among trafficked victims. Many factors can contribute to an individual being targeted for labor trafficking, but poverty remains at the top of the list.

People living in extreme poverty, within communities with limited access to resources and opportunities, make for easy targets for traffickers. Preying on vulnerable individuals, labor traffickers lure people into the workforce by providing the victim ways to “escape” his or her impoverished life. The fraudulent promises include job training, education and other false development possibilities. Some victims, with hopes of helping their families, eagerly explore the chance for a better life.

For victims of labor trafficking, pay is nil or non-existent. The employers of forced labor use physical and psychological violence to control their victims. Often, debt bondage becomes an unbreakable contract for victims. Occasionally, it is the parents’ or family’s debt that leads to children being sold as a method of payment for the debt. In such cases, impoverished parents sometimes send their children with a person they know and trust in exchange for money, believing in the professed promise of a better life for their child.

In Asia, the labor-related trafficking trade is said to be the most prevalent, valued at $51.8 million annually. The abundance is attributable to the profit that is generated from victims working in developed countries.

Poverty is a main catalyst and explanation for the large numbers of trafficked victims. The United States and other Western countries need to ensure their businesses are not utilizing trafficked victims. Policy changes, awareness and advocacy are needed. Labor trafficking will continue unless a united voice against the exploitation of the poor gains more momentum.