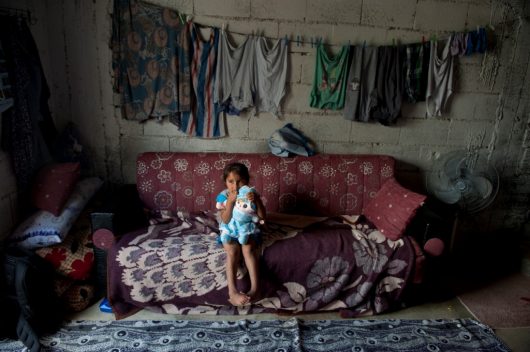 Australia founded their offshore Nauru Detention Center for asylum-seekers on the Pacific island Nauru in 2001. It closed for a brief period in 2008 while the Australian government built detention centers on the mainland, but Nauru eventually reopened for refugee-processing in 2012.

Asylum seekers who arrive in Australia without a valid visa are transferred to either the Nauru or Manus Island Detention Center, where they spend an average of 445 days behind bars.

Australian law dictates that there is no limit on the length of time a refugee may be held in a detention center.

This militarized system of dealing with refugees is designed for the ease of processing on staff.  It is also easier to sell to other countries as “effective” rather than identifying and adapting the Australian refugee system to current changing global migration patterns.

Despite criticism that its refugee system is inhumane, the Australian government’s methods in their detention centers are often envied and copied by other countries, particularly because of the hostile mood toward refugees in recent years.

In contrast to Germany, which accepted over one million refugees in 2015, Australia placed only around 13,750 refugees in their Humanitarian Program in the 2015-2016 year.

Recently, the Nauru Detention Center, in particular, has come under scrutiny since the release of around 2,000 staff incident reports from the Center. These detail, among other things, sexual and physical abuse of refugees as well as self-harm among refugees.

In July 2015, there was an average of one incident of a refugee self-harming every two days. These “incidents” ranged from slashing wrists or overdosing on pills to self-immolation.

Immigration Minister Peter Dutton stated in a press release that refugees lied about the incidents of sexual abuse at Nauru Detention Center and deliberately self-harmed in order to garner sympathy and speed up their immigration process.

Three non-governmental organizations have also petitioned the Royal Commission into Institutional Responses to Child Sex Abuse to investigate Nauru, based on the released reports of abuse.

Because the reports on the maltreatment of Nauru Detention Center prisoners were released so recently (first published by The Guardian on August 10th, 2016), there is no current information on whether the Australian government plans to close the detention center or allow it to remain open. There is also a dearth of information on what solutions the government will propose to fix the allegations of sexual and physical abuse to refugees.

Until the mistreatment of asylum seekers at Nauru Detention Center can be investigated thoroughly, proposed solutions are based on testimony alone. These solutions include improved living conditions, faster processing, and more visitations between refugees and any relatives/loved ones who live on the mainland.  An increase in healthcare, especially mental healthcare, for those living in the detention center is also a proposed solution.

Polio-Free Nigeria: Two Years Strong and Awaiting Certification The Rise and Impact of Renewable Energy in Africa
Scroll to top