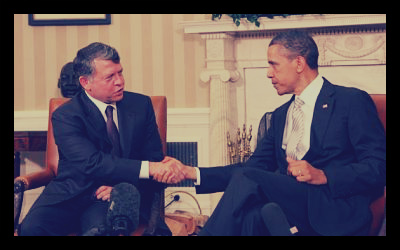 The Civil War in Syria has driven thousands of people out of the country and into Jordan. This has resulted in major problems in Jordan as they try to figure out what to do with all of the Syrian refugees. Recently, President Barack Obama made a public announcement offering $200 million in U.S. aid to help with the Syrian refugees in Jordan.

This pledge from Barack Obama for foreign aid money comes at an interesting time as it follows the extensive budget cuts recently put in place by the United States Congress. However, President Obama seems adamant on offering aid money to Jordan for basic services to help place and educate displaced Syrians, saying he will work with Congress to find a way to give $200 million extra dollars in U.S. aid. According to  Jordan’s King Abdullah II, whom Obama met with on Friday, March 22, more than 460,000 Syrians have fled their country in search of refuge within the Jordanian borders. This number is estimated to double in the upcoming months if the turmoil in Syria continues.

Putting these numbers into perspective: 460,000 people make up approximately a tenth of the Jordanian population. Doubling the number of Syrian refugees causes an almost 25% increase in the number of people in Jordan.

This increase in people will have serious effects on the economic situation in Jordan. Some economists predict a nearly 30% unemployment rate by the end of the year as more and more Syrians pour into the county. These many refugees are also predicted to cost over $1 billion. Yet, King Abdullah pledges to not turn away any refugees, asking “how are you going to turn back women, children or the wounded?”

The Obama administration seems committed to helping end the fighting in Syria, pushing for the current Syrian president Assad to step down. Yet, Obama absolutely refuses to provide U.S. military assistance for the Syrian opposition movement, saying that interference may discredit the message the Syrian rebels are advocating or may lead to even larger security issues. Financial support in Jordan to take care of the many Syrian refugees seems to be a substitute solution for showing its support for bringing peace to Syria without getting directly involved in the civil war.

Obama pledging the extra aid money is only half of the equation. Congress must now scrape together this money, which may be a difficult task, as evident from the inability for Congress to come to an agreement over budget cuts.

FAO Allocates Funding to Combat Locust Crop Destruction in Sudan What Is The Poverty Line?
Scroll to top