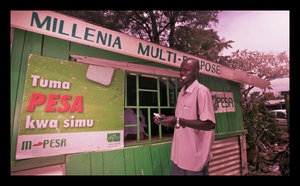 Here in the U.S., cell phone apps such as ‘Venmo’ that allow simple and quick money transfers have revolutionized the way we exchange money. However, with mobile banking as well as Venmo-like apps, they require all users to actually have a bank account. While speed and efficiency are a huge pro about these apps, they, as they are, wouldn’t necessarily be as successful a venture in the developing world.

M-Pesa (meaning mobile ‘money’ in Swahili) has grown to be the most successful mobile financial service in the developing world. Started in 2007, the company’s main goal wasn’t necessarily convenience but had the more objective of creating an app that people without bank accounts can use. Bank accounts usually must maintain a minimum balance or have other requirements many people living in developing areas just cannot meet.

M-Pesa users only need two out of three things: a mobile phone and an ID card or passport. With these in hand, they can do numerous things just from their phone: deposit and withdraw money, transfer between different accounts (even to those without an M-Pesa account), manage their transactions, pay their bills, and even purchase mobile minutes. With about 1 in 5 sub-Saharan Africans actually having a bank account, M-Pesa opens up an entire world for people to exchange money freely without being tied down to a bank.

The company manages an individual’s account through their phone number. As part of Safaricom’s and vodacom’s networks (service operators in Kenya and Tanzania: think Verizon or AT&T), only those who receive their service through these companies can take advantage of the system. Once money is transferred, users can cash out at various retail outlets or stores that normally sell cellphone minutes.

M-Pesa was initially created to help the transfer of funds for people receiving microfinanced loans because it helped keep rates down, as it cut out the direct contact with money. Now, it operates in 5 countries including Afghanistan, South Africa, Kenya, Tanzania, and India. It reaches 15 million users in Kenya alone.

Dadaab Stories: By the People, For the People Colon Misses Out on Panama’s Economic Growth
Scroll to top