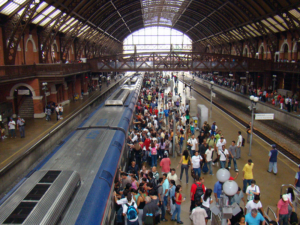 As one of the largest and most populous nations in the Americas, Brazil has long served as a safe haven for immigrants around the world. In fact, migration in Brazil includes people from Europe, Asia, South America and Africa. Immigrants in Brazil, in turn, have brought many economic and cultural benefits to the nation.

Brazil’s first wave of non-colonial immigration began in the late 1800s; from 1870 to 1930, between 2 and 3  million migrants from Europe, Asia and the Middle East sailed to the nation in search of a new home. The abolition of slavery spurred the influx of foreigners. Landowners around the country believed that immigrant laborers would help Brazil form a wage-based economy similar to European countries. However, in 1891 Brazilian elites also sought to “whiten” their nation by enacting racist laws which welcomed European immigrants while banning those from African and Asian nations. Brazilians saw Japanese immigrants as an exception to this rule. They viewed Japanese immigrants as essentially European in their mannerisms and industrial habits. In 1935, a federal deputy commented, “The Japanese colonists are even whiter than the Portuguese.”

Brazil has aggressively sought out foreign workers to grow its economy. After World War II, for example, the government encouraged workers from Spain, Syria and Lebanon to move to the country, correctly assuming that the laborers would aid Brazil’s industrial sectors. By 1970, 115,000 Spaniards and 22,000 Syrian-Lebanese called Brazil home.

In the following decades, the nation saw a wave of Korean immigration. These families, like those before them, saw Brazil as a land of social mobility. They purchased cheap visas into Bolivia or Paraguay and used the relaxed border laws to enter Brazil.

Brazil’s attitude towards immigrants stands out in its informality. While undocumented immigrants do not always receive encouragement to enter Brazil, there remain no current policies that discourage them. In addition, Brazil’s government has frequently created legalization programs that help unregistered citizens gain documentation. The three most recent of these programs gave more than 100,000 foreigners the right to permanent residency in Brazil.

More than 40,000 of those 100,000 foreigners originated from Bolivia. The country of 11 million has struggled for years financially, and as a result, many have flocked to the surrounding nations of Chile, Peru and Brazil. Currently, more than 130,000 Bolivians officially reside in Brazil, although the Brazilian Embassy in the Bolivian La Paz estimates that in total, more than a million Bolivians live within Brazilian borders. This leaves a vast majority of these immigrants undocumented and subsequently subjected to long hours and low pay in the clothing factories and sewing shops where they typically work.

The largest immigrant population currently residing in Brazil, however, is not Bolivian but Venezuelan. Venezuela is currently experiencing the largest recorded refugee crisis in the history of the Americas, due to political turmoil and widespread poverty. Brazil’s government has been generally supportive of these immigrants. In August 2018, for example, when the state of Roraima requested to close its border with Venezuela, the Brazilian Supreme Court denied the request on constitutional grounds.

Currently, Brazil houses more than 260,000 Venezuelan refugees. The government has granted asylum to more than 20,000, and a two-year residency permit was made available to purchase in 2017 if certain applicants do not qualify for asylum. A 2020 program titled Operação Acolhida (“Operation Welcome”)  funds more than 10,000 plane tickets to help Venezuelans travel to Brazil and is helping 50,000 to get to cities around Brazil.

Mutually Beneficial into the Future

Brazil has gained many cultural benefits from the enormous amount of immigrants living within its borders. School children and adults alike enjoy Japanese manga and anime; similarly, Brazilian jiu-jitsu would not have been possible without the sumo wrestling the Japanese brought. Kibe, a simple croquette that bars and street carts around Brazil sell, comes from the Middle East via Lebanese immigrants. Stores owned by Korean families provide many items in a typical Brazilian’s wardrobe.

Some organizations worry that as President Jair Bolsonairo continues to lead the country, Brazil will become less hospitable to migrants. One of the president’s first moves in office, after all, was to pull out of a United Nations migration accord that had been signed the previous month. “We will never withhold help to those in need, but immigration cannot be indiscriminate,” he wrote on Twitter. Still, it seems that the principles of migration in Brazil have generally stayed the same under Bolsonairo. The nation continues to house many from struggling Latin American countries; this February, it also became the first nation in the world to grant humanitarian visas to Ukrainians.

Migration in Brazil has been a symbiotic process for many years. Brazil has been hospitable towards immigrants, more so than most large countries; and those immigrants have repaid the nation through their work and their culture. One hopes this relationship is able to remain mutually beneficial long into the future.