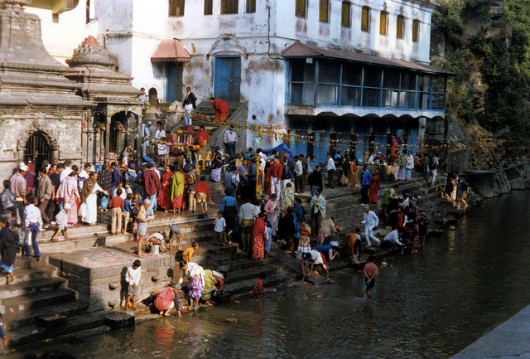 In remote regions of Nepal, the earth’s natural wonders can be felt running through the currents of rivers, lakes and glacial melt–all of which have been deemed essential for harnessing renewable energy provided through micro hydro plants.

How exactly is energy gleaned from a micro hydro plant? Practical Action, a company which uses technology to challenge poverty in developing countries, describes it as, “the small-scale harnessing of energy from falling water, such as steep mountain rivers.”

The company goes on to explain that “Using this renewable, indigenous, non-polluting resource, micro-hydro plants can generate power for homes, hospitals, schools and workshops.”

Ultimately, it is by using power from these water sources, that micro-hydros are able to generate energy, therefore producing electricity, and ultimately giving many Nepalese access to “reliable and clean energy through community managed micro-hydro plants,” states an article by the World Bank.

In fact, it is through the Nepal Micro Hydro Promotion project, that the Nepal Government (with help from the World Bank) has already built 400 micro run-of-the-river hydropower plants between 2007-2014.

Additional revenue is created through a micro hydro project which issues carbon credits by displacing diesel fuel with renewable energy. Afterwards, any credits received can be sold and profits will help fund operations and maintenance of the existing hydros.

The first ever carbon credits alone reduced 66,345 tons of carbon dioxide, which is the equivalent of taking 14,000 vehicles off the road for a year, states a World Bank infographic.

With the establishment of micro hydros, 625,000 more people now have access to electricity and the potential for this renewable energy stands tall: with reliable electricity children can finish their homework into the evening, businesses and schools can remain open later and even more importantly, paths can be illuminated ensuring a safer means of traveling once night falls.

“Another benefit is improved health and household finances. People are spending less money on kerosene, diesel and batteries – and breathe in less smoke from oil lamps and diesel generators. And the environment benefits from reduced chemical pollution from dry cell batteries,” states the World Bank.

Ultimately, micro hydros encompass four community benefits: financial security, the stimulation of jobs, the creation of a safe environment through lighting and finally, the establishment of a healthy environment by choosing renewable energy over non-renewable sources.

Even with as many as 130 plants out of commission due to the recent earthquakes Nepal has experienced in April and May, the government recognizes their irreplaceable value and plans to rebuild all of the micro-hydros which have been damaged—74 are already now fully or partially operating.