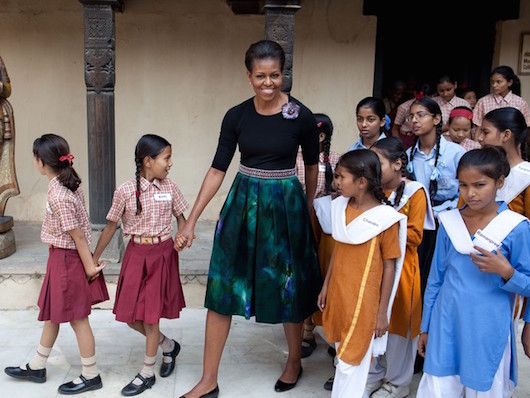 To begin her speech, Obama said that about 31 million young girls around the world are not in school. Many of these girls lead difficult lives because of the lack of sufficient education in their area. Girls who are not educated are more susceptible to HIV/AIDS and other life-threatening diseases. They are less likely to build successful lives for themselves without proper education.

Bendu Fafana, a young girl from Bong Country, Liberia, said that attending school was challenging for her because her father was not present in her life and her mother had passed away.

“I dropped from school because I was not getting any support,” Fafana said.

In a video presented by the White House, President Barack Obama said that there are studies that prove that educated girls are much less likely to get married early. Not only will their future children be healthier, but the family will have a better chance at a job that creates sufficient income for the children. This creates a chain of healthy living, which can generate better-functioning societies that lead to greater opportunities for economic growth for both developing and developed countries.

Not only will this endeavor help the U.S. economically, but this opportunity can also help produce worldwide equality. Obama said that economic obstacles are not the only things that inhibit girls from receiving schooling: much of the problem is about views and cultures.

“It’s about whether societies cling to laws and traditions that oppress women,” she said.

“Let Girls Learn” will fund a program in North Africa and the Middle East that will encourage the native girls to learn about social issues in their communities and societies. The campaign will also provide a space that will encourage girls to reflect upon human rights and democracy. In addition, the initiative will contribute to organizations against gender-based violence.

With help from USAID, the U.S. Department of State, the Millennium Challenge Corporation and the U.S. Peace Corps, “Let Girls Learn” will increase efforts to produce tactical partnerships and political goals that will help adolescent girls succeed.

Alexa Ofori, a Peace Corps Volunteer in Cambodia, gave her thoughts about one of the goals of “Let Girls Learn.”

“Girl empowerment is for a girl to be able to have the self-esteem and, really, the confidence to be able to feel like they can do anything they put their minds to,” she said.

This education plan includes these programs and at least 24 others that will provide information about proper health and nutrition, prevent child, early and forced marriage, ensure safety for young children and, of course, deliver education to areas without.