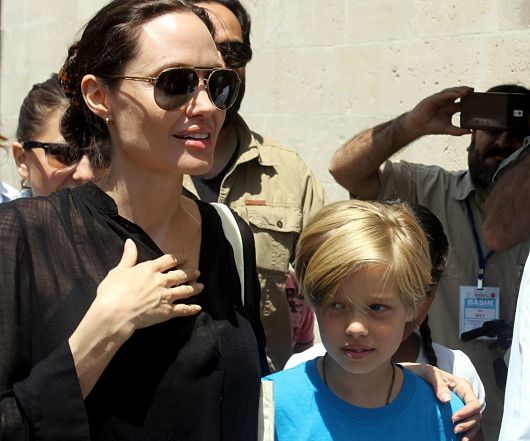 According to the UN Refugee Agency, Turkey is the top refugee-hosting country in the world with just under 2 million asylum seekers. A vast majority of the refugees are Syrians, Kurds and Iraqis fleeing the violence of the Syrian Civil War and ongoing crisis involving the Islamic State.

In an effort to bring awareness to one of the largest refugee crises in history, Angelina Jolie embarked on a UN tour of the affected region. The movie star and long-time humanitarian was joined by her daughter, Shiloh, and stopped at the Midyat Refugee Camp in Turkey on June 20th to commemorate World Refugee Day. Jolie was also accompanied by UN Special Envoy Antonio Guterres. The group met with Turkish officials, including President Recep Tayyip Erdoğan to discuss the challenges that Turkey faces given an unprecedented number of refugees.

Jolie issued a statement at the camp in which she calls on the world to act. She said, “We are here for a simple reason: This region is at the epicenter of a global crisis. Nearly 60 million people are displaced from their homes. That is one in every 122 people on our planet. Our world has never been richer or healthier or more advanced. Yet never before have so many people been dispossessed and stripped of their basic human rights.”

Later in her speech Jolie stressed the impact that refugee camps have on the people that house them. While providing more security than war torn cities and villages, the camps more often than not make the poor even worse off. Jolie stated, “Families like the six young people I met yesterday, living in Lebanon without parents, on half food rations and paying US$100 a month to live in a tent because UNHCR does not have the funds or capability to take full care of everyone.” Already with limited resources and away from home, refugees have the burden of coming up with funds to keep their temporary shelter even though, as refugees, they “cannot legally work in their host-countries.”

There is hope, however. Jolie made her speech on a key day, a day dedicated to bringing light to the very issues at the core of her delivery. Her celebrity status will ensure that more people listen to her message, and in turn act to help. Jolie and other media figures have even inspired governments to act. Jolie thanked the governments of Turkey and other refugee hosting nations for taking in millions. To finish, the actress wished all the families she spoke to, and by extension the refugee families across the globe, a good Ramadan with “Ramadan Kareem.”