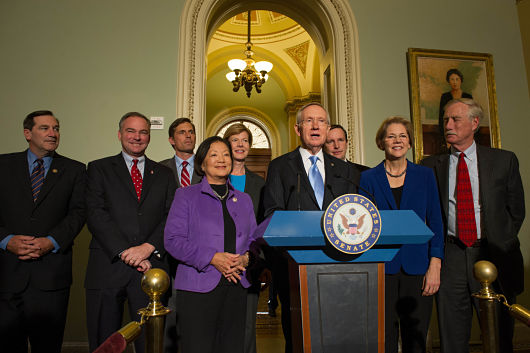 How many Senators are there? There are 100 Members of the United States Senate, two from every state. But who are these 100 men and women, and what do they do? This article seeks to answer some of your most basic questions about U.S. Senators.

What are the requirements for being a senator?
A senator must be at least 30-years-old and is required to have been a U.S. citizen for nine years. A senator must also be a resident of the state that he or she represents. Once elected, a senator stays in office for six years.

Elections for the Senate occur every two years, when one-third of the Congressional branch is up for reelection. After a senator’s six-year term ends, he or she can run for reelection an unlimited number of times. At the beginning of the 114th Congress, the average length of service for current senators was 9.7 years.

What does a senator do?
Legislative business takes up most of a senator’s time. Senators work in committees, such as the Foreign Relations Committee and the Budget Committee, to handle legislative matters. When a committee favors a bill, it meets with experts and executive agencies to gather information before adding amendments or changing the bill’s language. Committees can then report out legislation to the full Senate, where debates take place.

Senators also handle executive business when in session. Specifically, the Senate has the power to rule on treaties that the president proposes. Senators also vote to approve or deny cabinet, ambassador and Supreme Court justice appointments.

Who are my senators?
Who your senators are depends on your state of residence. Find my Senators.

How many minorities are represented in the Senate? How many women?
The current 114th Congress is the most diverse in history. However, out of 100 senators, just six belong to racial or ethnic minorities: three Hispanic, two African-American, and one Asian-American. Twenty women currently serve in the Senate, which is three more than served in the 112th Congress. There was no increase in the number of female senators between the 113th and 114th Congresses.